Funeral services for Ruth Margaret Jacobson, 99, of Albert Lea will be at 10:30 a.m. Saturday at the Bayview/Freeborn Funeral Chapel. The Rev. Kent Otterman will officiate. Interment will be in the Lime Creek Cemetery, rural Emmons. Visitation will be one hour prior to the service. Online condolences are welcome at www.bayviewfuneral.com. 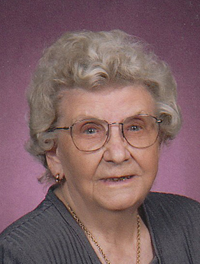 Ruth Margaret Jacobson was born on Jan. 4, 1913, in Lake Mills, the daughter of Gilbert and Margaret Ausen. She was baptized at Salem Lutheran Church in Lake Mills and was confirmed at Lime Creek Lutheran Church in rural Emmons. She was a lifelong resident of Albert Lea. On Oct. 10, 1932, Ruth was married to Helmer Rierson, and on Nov. 30, 1946, she was married to Russell T. Jacobson in Albert Lea. Ruth worked at Naeve Hospital, retiring in 1977 after 23 years. She was a member of Grace Lutheran Church where she was active in the Altar Guild, sewing group and church circle. She was also a member of the VFW Auxiliary and the Senior Citizen’s Center. Ruth was very active at Thorne Crest Retirement Community.