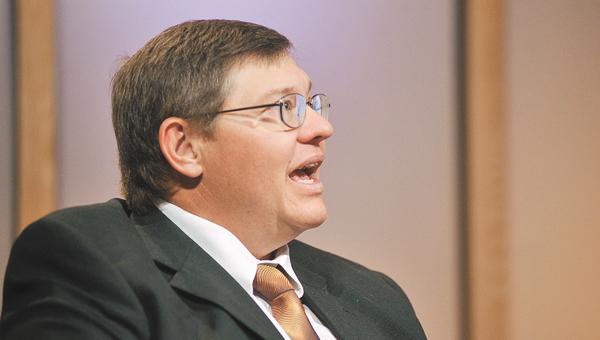 Linden Anderson, R-Waltham, a challenger for the Senate District 27 seat, takes part Tuesday in the taping of a roundtable debate with incumbent Dan Sparks, DFL-Austin, at the KSMQ studios. -- Eric Johnson/Albert Lea Tribune

AUSTIN — Linden Anderson would be the first to announce he isn’t a typical GOP candidate.

“I am running on the Republican ticket, but I’m not sure you’re going to find any local union presidents running on that ticket,” he said.

During a KSMQ/Austin Daily Herald taped debate Tuesday afternoon, Anderson and incumbent Sen. Dan Sparks, DFL-Austin, discussed ways to cut back on the political gridlock in St. Paul and get members of the Minnesota Legislature to reach across the aisle. The debate, which was the first time the candidates had met face to face, will be available at www.austindailyherald.com and aired on KSMQ later this month. 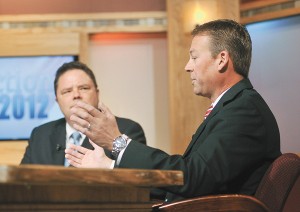 Anderson, who has helped put state employee contracts together in the past, said he knows people in all walks of life and can see both sides of an issue.

Bringing up his previous bipartisan accomplishments, Sparks said he was proud to work with District 27A Rep. Rich Murray, R-Albert Lea, to help ease up regulatory stress on smaller energy companies, like Freeborn-Mower Cooperative Services. Their combined efforts helped relieve regulatory stress on utilities companies and could reduce the rates consumers pay for electricity.

Sparks said even as a member of the Democratic minority he passed more bills than many of his colleagues in the Senate.

“We need to see more of that in St. Paul, and less of the bickering and gridlock,” he said.

In light of the two state amendment changes that will show up on November’s ballot, both candidates said they would like to see it take more than a simple majority in the Legislature to get such amendments on the ballot. Currently, a simple majority is enough to send a question to the ballots, and the governor has no power to stop it.

“That constitution is pretty important,” Anderson said. “It’s not something that should be changed lightly.”

While he supports both the proposed marriage and voter ID amendments, he said he would rather see those issues worked out at the state Legislature, not put in front of voters.

Though he did not comment on the two amendments on the ballot right now, Sparks agreed with Anderson’s sentiment about making constitutional changes more difficult. He said the long-lasting implications worried him.

“They’re basically there to protect people’s rights,” he said. “Do we want to go down that slippery slope?”

When asked about the possibility of imposing a sales tax on goods like books, movies and music purchased over the Internet, neither candidate said definitively whether he would support one.

“We have to have that discussion about fairness,” Sparks said.

Shoppers do not pay sales tax to purchase the same goods online as they do at retail locations in Minnesota, leading some to argue it creates a playing field stacked against those retailers.

“I am hesitant to say that we should add another tax,” Anderson said. “However, I do know that there are local businesses that do get affected.”