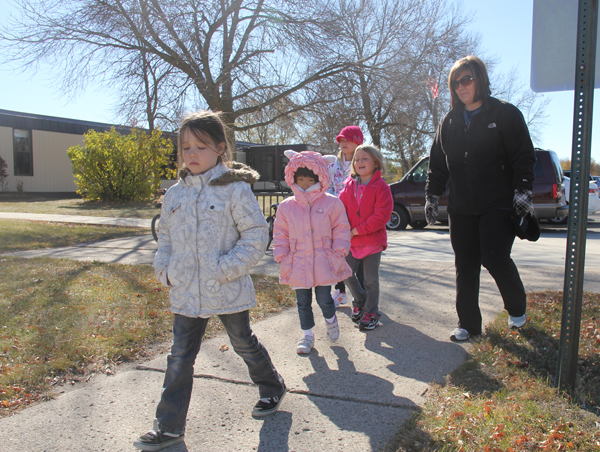 Students and volunteers walk together for Sibley Elementary School’s Stroll for a Goal on Friday. The event was a fundraiser for the school. -- Kelli Lageson/Albert Lea Tribune

Students at Sibley Elementary School had a special chance to raise money, get their principal in a dunk tank and get some exercise all at the same time on Friday.

Sibley’s parent-teacher organization, Sibley SHARE, organized a walking event called Stroll for a Goal. Amy Ladlie, treasurer of Sibley SHARE and one of the organizers of the event, said students were able to take pledge forms home to raise funds. 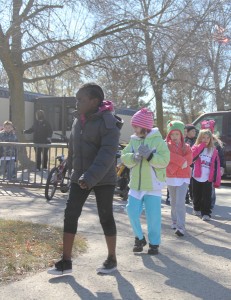 Students at Sibley Elementary School start their Stroll for a Goal Friday morning. The event was a fundraiser for the school.

“It was a great success,” Ladlie said. “We were able to meet our financial goal.”

And that goal wasn’t small at $15,000. It will be the one fundraiser the students do all year, according to Principal Ross Williams. Ladlie said Sibley SHARE has been talking about doing a physical activity for a fundraiser for a few years, but this is the first year they were able to get everything in order.

She said they definitely want to continue to do this type of fundraiser in the future. Previously, students had sold food items, candles and other products, but then the school was only receiving part of the proceeds.

“Instead of selling things that people don’t need, it was nice to have an outdoor activity that everyone could participate in,” Ladlie said.

Williams agreed that it was a great event for the school. He said that kindergartners walked about a one-mile distance, while all other students walked a three-mile route around the school and to Lincoln Park off Lincoln Avenue. Because of donations from Hy-Vee and Kwik Trip, the children were able to have a snack of bananas and water while at the park.

“It was certainly a fun day,” Williams said. “It really started with the Blue Zone initiative and thinking about being healthy and getting our kids involved.”

As each class came back from walking, students had the chance to drop Williams into a dunk tank of water. And students who raised more than $50 were put into a drawing where winners could smash a pie into teachers’ faces.

“The kids had a great time,” Ladlie said.

Sibley SHARE funds events throughout the year for all grades. Some of the things it funds include assemblies, field trips, gifted and talented programming, educational magazines and online educational resources, author visits, room parties and fun night, classroom special needs and more.