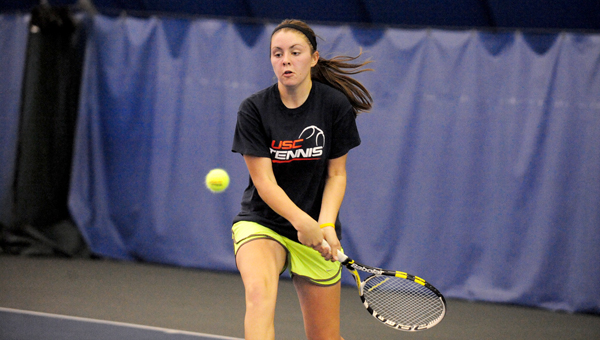 MINNEAPOLIS – In her first match of her first ever state tennis appearance at the Reed-Sweatt Family Tennis Center in Minneapolis, United South Central’s Claire Christian fell 6-2, 6-2 to her opponent, Jessamy Jones.

Jones, a defensive player, stayed consistent throughout the matches and waited for Christian to make an error which is what the Rebels’ head tennis coach Jill Bailey and Christian were anticipating.

“We talked and said you’ve got to be patient and look for an opportunity,” Bailey said.

Christian felt her approach was the strongest in the two sets and it was noticeable that as she became more comfortable she moved to the net more.

“I’m surprised that she doesn’t appear in the least bit nervous,” Bailey said. “Usually you have to fight those jitters so this is great.”

Christian will play again at noon following a doubles tournament.