Art Center should get a new home

There’s been something I’ve been meaning to say since I moved to Albert Lea from Ellensburg, Wash., nearly seven years ago: 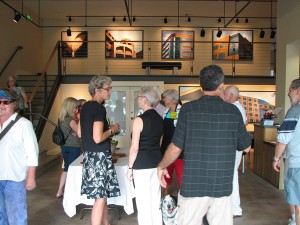 This is what people see when peering in the front windows of Gallery One in Ellensburg, Wash.

The Albert Lea Art Center should find a new home.

Successful downtowns are about pedestrians walking past windows.

Let me tell you a story about a vision. It is the story of the art center in Ellensburg, a city the same size as ours. I know, I know. Our town doesn’t have to be like other towns and all, but comparisons among towns — or counties, schools and states — happen whenever people move here. These comparisons can educate and push us to be better. That’s valuable.

The Ellensburg Community Art Gallery was a little art center that started small in 1967 and moved from one rented location to another. It changed its name in 1994 to something more striking: Gallery One Visual Arts Center, which everyone simply called Gallery One. In 1994, it purchased the historic 1889 downtown building it was in — called the Stewart Building — and rented the first floor to merchants.

In 1997, the board had a vision to make the little nonprofit organization something spectacular for the community, not merely for local art. The director of Gallery One kicked off a major remodel fund drive. The little group applied for major national and regional grants to restore the Stewart Building. It raised $900,000 through contributions and grants just to begin the first phase of the building’s overhaul in the summer 2002. The entire project was $1.2 million.

Talk about shooting for the stars.

In 2003, Gallery One opened in its newly remodeled home. The aim was to be more than a place to show local art. It was a community gathering place and a place to create art, not just see art by locals.

The first-floor merchants were gone, and the art center now occupied the entire building. It had a first floor with a gift shop, two art galleries, kitchen, classrooms and wheelchair-accessible restrooms. There were big storefront windows, so pedestrians and motorists could be lured inside. There was an alley-side outdoor courtyard. There was a mezzanine with more art on the walls along it. From the mezzanine, people could look down on the first floor. It had a new elevator to make the entire building useful for the long term. The second floor had a major gallery, studios rented to artists at a low cost and abundant storage space.

I went to Gallery One frequently as part of living there, often not because of the art on display. Businesses had planning meetings there. Chamber After Hours happened there frequently. Musicians would perform there. Other nonprofits and local causes held fundraisers such as wine and beer tastings. Sometimes, I just needed to buy a gift really quickly, and the gift shop had local arts and crafts such as earrings, cookies jars, small paintings or wine coasters. My wife took me on a Valentine’s Day date there by enrolling us in a pottery class. We got our hands messy and loved it.

And then there was the first Friday of each and every month. Gallery One led the downtown in establishing what was called the First Friday Art Walk. Gallery One would show its new exhibitions on the first Friday of the month, and — get this — many other businesses would change their wall art on that day, too. I am talking coffee shops, restaurants, bars, framing shops, funeral homes, insurance providers, banks, pet stores, clothing stores, the United Way, the chamber office, the whole gamut. Many of them would stay open late on Fridays.

Participating business would hang Art Walk flags to alert people to which businesses had new art, and people from 4 to 7 p.m. would stroll around to see it all. Often, restaurants or bars would have featured entrees, wine tastings, music or something cool.

Gallery One had art by local artists, to be sure. Even my newspaper photographer was on display once in a while. But the organization usually made headlines for bringing in stunning art by talented regional and national artists. Not now and then. Almost every month.

Forget matters of artist membership. Imagine going to the Albert Lea Art Center to see art that, a few months prior, was on display at the Walker Art Center in Minneapolis or perhaps was featured at the Des Moines Art Center. When you are at the exhibition, you notice local art in another gallery that fits well in your kitchen, so you buy it.

Or you notice an artist who painted several local dogs, so you commission her to paint your dog. Well, that’s what I did. In fact, that painter was the director who led the $1.2 million fund drive. The painting of my dog Alta by Mary Frances hangs in our living room.

She wasn’t merely an administrator. Her title was executive director, and she was in charge. She had a visionary board backing her.

The Albert Lea Art Center would do well to split from the Bessessen Building not just because of the time-consuming legal dispute it had with its landlord but also because that building, while no doubt beautiful, isn’t suited to being a community art gallery. It needs windows to draw people in, to let the sun brighten the place and space for galleries, classrooms, meetings, studios and more.

I would love to go to the Art Center for a reason other than art. I would love to have an art organization that is a leader in the community, not some out-of-sight, out-of-mind accessory. That, to me, is the difference between an art center and a community art center.

The focus of our local art center is just on local art. It’s not as much on community.

Don’t just look at Ellensburg for examples. Look at how focused the Albert Lea Community Theatre is on bringing people in the doors and doing big projects. The Met Opera live on screen here? Wow! Or the Freeborn County Historical Museum’s $1 million expansion. Holy moly! Both groups show great vision and gusto.

There are many good places downtown where the Albert Lea Art Center could start over with a new vision.