The power of pennies 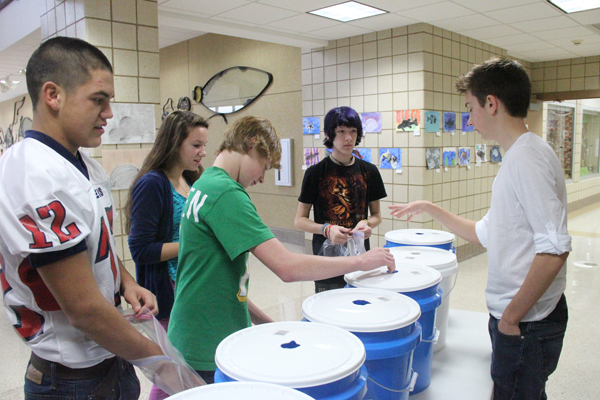 Students put pennies in their own buckets for positive points and add nickels, dimes and quarters to other grades’ buckets to try to win the penny war at Albert Lea High School. Funds raised will help with a meal-packing event that will be in December. -- Kelli Lageson/Albert Lea Tribune

There’s a war going on at Albert Lea High School, but the weapons being used may take you by surprise. 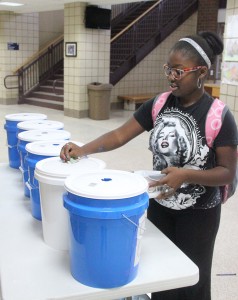 Students are fighting with donations of pennies, nickels, dimes and quarters to see who can raise the most money in a penny war. Jacob Jensen, an ALHS student and organizer of the event, said all funds raised will go toward a meal-packing event that will be held this December.

This week at the high school students in each grade can bring in pennies to raise their total. They can also bring in nickels, dimes and quarters to negatively affect the other grades’ totals.

Jensen is part of the MobilePack Leadership Team, which is made up of eight students at ALHS. They want to raise as much money as possible through the penny war and through donations from businesses and the community to be able to pack 100,000 rice meals. The meal-packing event will be Dec. 1 at Albert Lea’s National Guard Armory. 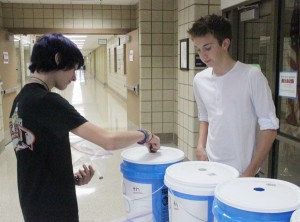 Jacob Jensen, one of the organizers of the penny war at Albert Lea High School, watches as eighth-grader Michael Smith adds pennies to his grade’s bucket on Tuesday.

“There’s still quite a bit that has to be raised,” Jensen said.

He said so far at the high school, students have been competitive with donating money. The group’s goal is to raise $22,000, so they can pack 100,000 meals. The meals each cost 22 cents and can feed four to five people.

“I like to see kids my age getting involved,” Jensen said. “It’s not just adults that have interest in helping others.”

The idea started about six months ago, and the penny war is a small part of the group’s fundraising effort. They hope to raise about $500 from the penny war. Each grade competes against the other grades for a chance at prizes like gift cards from local businesses. 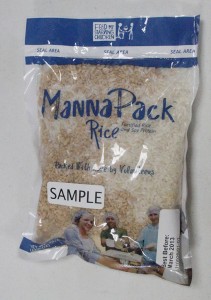 Funds raised during penny wars at Albert Lea High School will go to a meal-packing event that will be held in December. Shown is an example of one of those meals — a fortified rice and soy protein combination.

Feed My Starving Children hosts MobilePack events across the nation and brings the food and packaging materials. The local group will supply the funds and volunteers to package the meals. Jensen said their group has reached out to area churches to find volunteers, but that volunteers and funds are still needed.

The meals include rice, soy, vegetables, a vegetarian-based chicken flavoring and a vitamin and mineral mix. More than 133 million meals have been sent to more than 70 countries since Feed My Starving Children was started in 1987.

For those interested in donating or volunteering for the meal-packing event, email organizers at AlbertLeaFMSCMobilePack@gmail.com or go to www.fundraising.fmsc.org/AlbertLea to donate directly and to see how much the group has raised so far.