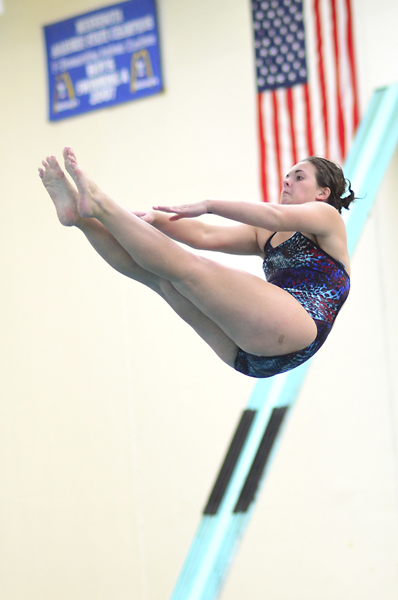 Makenna Friehl gets some major air on one of her dives during the Tigers’ meet against Winona on Thursday. -- Buck Monson/Albert Lea Tribune

The Albert Lea girls’ swimming team made a comeback and beat Winona on Thursday by a score of 94-92.

The night started out with a race that would be a sign of things to come. The 200-yard medley relay came down to the wire as the Winhawks won the initial event by .05 seconds.

The second event wasn’t much different than the first, as far as a dramatic finish. The 200-yard freestyle was also won by the Winhawks, this time by a margin of .66 seconds. Tigers’ Haley Simon had her whole team cheering her on in her last stretch, but just came up short.

The Tigers finally got a victory in the third event. Bailey Sandon won the 200-yard individual medley in another close race. Sandon beat out the Winhawks’ swimmer by .28 seconds.

“Even when we were getting touched out, they were swimming the best times of their lives,” said Tigers head coach Jon Schmitz.

The Tigers were down 34-28 at the start of the diving portion.

Karli Kriewall, the Tigers’ lead diver, was down by about 12 points to the top Winhawks’ diver. In the final round, Kriewall executed a dive that scored 49.50 points. All the Winhawks’ diver had to score was 38 points on her final dive. Nerves got the best of her as she made a big  splash and only scored 25 points, giving Kriewall the win, and a big boost for the Tigers.

Schmitz said the Tigers had put themselves in a hole but started to come out of it with Kriewall’s win and the performances of Lindsey Horejsi.

Horejsi won the 100-yard butterfly by few seconds, but the Winhawks scored some points by finishing second, third, and fifth, while Tigers’ Carly Nelson placed fourth. With that, the teams each scored eight points and the Tigers were left eight points down.

The Winhawks won the next event, giving them a 12-point lead over the Tigers with a score of 61-49.

Up next was the 500-yard freestyle. With the Tigers needing some major points, Haley Simon won and Sara Rasmussen finished second with Mady Dahl also placing to score a point.

“The 500 really was the turning point, with the 1-2 finish and Dahl scoring a point,” said Schmitz.

The team of Horejsi, Anderson, Simon and Ahnika Jensen won the relay while the other Tigers team finished third. With that race in the books, the Winhawks lead was wiped out. They were tied 70-70 with three events to go.

The 100-yard backstroke was next with the Winhawks winning that one. The Tigers did score second, third and fourth place finishes giving them more points in that event and taking the lead in the meet for the first time.

It was Horejsi’s turn again as she broke her own record in the 100-yard breaststroke that she just set nine days earlier. The Tigers raised their lead by eight points with one event left.

“Lindsey has broke a record in every meet we had this year,” said Schmitz. “All we needed was a second place in the last relay and that was it.”

The Tigers did just that, placing second in the final relay to win the meet by two points on a comeback.

“That was a great, competitive meet,” said a drenched Schmitz, after he jumped in the pool as part of the celebration.

The Tigers are undefeated at home this season. Their next meet is the true team sectionals in Northfield tonight and Saturday.