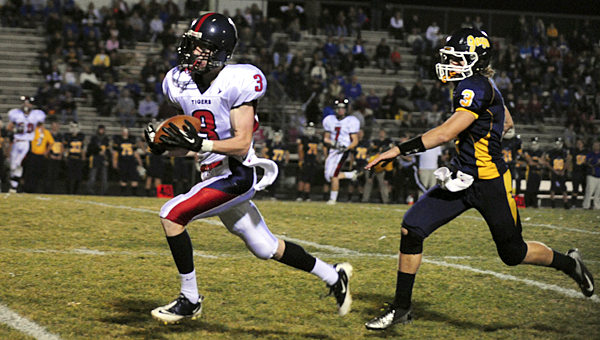 WASECA — The Albert Lea football team (2-6) shocked many people Tuesday night after beating Waseca (3-5) 14-9 in the first round of sections.

In their first game of the year back in August the Tigers had lost 42-7 to the Blue Jays.

“We’re better now than we were in Week 1,” Tigers head coach Max Jeffrey said. “We are not only better players, but we are better coaches now too because we understand our team better.”

The game was action-packed, and the win could have went either way down to the final 10 seconds in the fourth quarter.

The Tigers got off to a good start in the first quarter when a pass was thrown from Derek Burkard to Dylan See-Rockers who then ran the remaining yards for a 53-yard touchdown with 8 minutes, 38 seconds remaining. The two-point conversion was no good, but the Tigers held Waseca 6-0 through the first half.

“It was a great momentum builder,” Jeffrey said.

Another big play for the Tigers in the first quarter was a 50-yard pass from Burkard to Makael Lunning. Following the pass, the Tigers got within 15 yards of another touchdown, but were stopped by the Blue Jays.

The Tigers stayed consistent in their play throughout the second half. Lunning made an interception with 11:09 remaining in the third for the Tigers to take over on downs. Nothing much came of it and ended with a punt to the Blue Jays.

Waseca rushed its way down the field toward the end of the third quarter and at 4:07 scored its first touchdown. The two-point conversion was good giving the Blue Jays the 7-6 lead.

The Tigers were still looking for revenge, but so was Waseca.

The Blue Jays were forced to turn over the downs to Albert Lea right away in the fourth quarter. As the Tigers got to their own fourth down, they punted from the three-yard line and were blocked by Waseca. With a safety, the Blue Jays improved to a 9-6 lead.

The matchup got heated and fans screamed and coaches paced as the clock ticked below the two-minute mark.

Albert Lea’s Ethan Abben was able to break away and run in a 17-yard touchdown to take back the lead for the Tigers. Abben’s extra point attempt was good. With 1:51 left in the game, the Tigers led 14-9.

With 1:03 remaining the Blue Jays were third and seven with 50 yards remaining. All they needed was one touchdown to seal the deal.

Waseca got within nine yards of the goal line, but because of a combination of incomplete passing and a tough Albert Lea defense, the Blue Jays were stopped in their tracks. And for the final time Albert Lea took over on downs with 13.5 seconds remaining.

Albert Lea had five first downs while Waseca had 10. The Tigers led the game in passing yards 237-44, and the Blue Jays led rushing yards 255-95.

Jeffrey added that the win was good not only for the seniors and the program,  but it more importantly means the team gets to play another game.

The Tigers will travel to Faribault (6-2) for a 7 p.m. game Saturday at Bruce Smith Field.