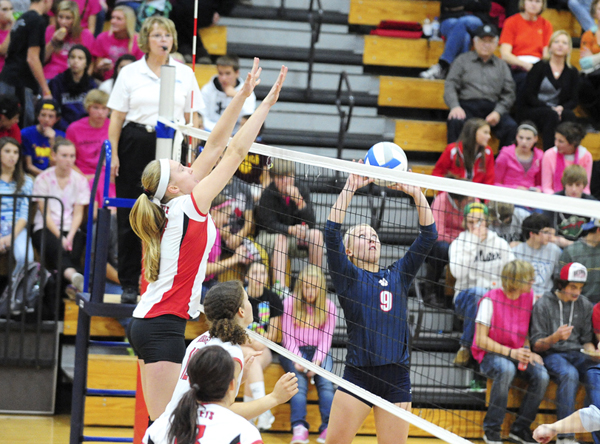 The Albert Lea girls’ volleyball team hosted Rochester John Marshall on Tuesday and while they took a 3-0 loss, they never gave up.

The young Tigers, a team of only two seniors, fell short in Game 1, but jumped out to keep a short lead in Game 2.

The Tigers’ led from a 5-4 set until they were up 12-10 and John Marshall went on a four-point streak. Albert Lea was able to score seven more points before the Rockets got to 25.

“We’ve never seen them play,” Deyak said. “And when you haven’t seen a team play, it’s really difficult to know how to prepare for that.”

The biggest thing the Tigers were unprepared for was the Rockets’ Brianna Atkins.

Atkins had a slide that proved effective.

“They’re probably one of the first teams that have used an effective slide all season,” Deyak said.

The Tigers have worked on blocking at the net and using their middle attack over the last three months, but Deyak said there is still room for growth.

“Learning how to adjust to a team defensively is another thing that an inexperienced team doesn’t have much practice at,” Deyak said. “They need to learn how to read the play better.”

In Game 3, the Tigers trailed by only three for the first half of the set before a combination of Tiger errors and Rocket hits gave John Marshall an 18-11 lead. The Tigers made a handful of kills and blocks to finish the final set six point shy of John Marshall 25-19.

Deyak said her team has a lot of potential, but the pieces just have to be put together.

Annie Ladwig is the Tigers’ all-around player who is always going for the ball and Camryn Keyeski is strong in passing and directing the defense. Deyak said Bryn Woodside really hustled during the match against John Marshall to try and get to every ball.

“That was one of the things we’ve worked on,” Deyak said. “We had to learn to go for every second ball. We want our setter to touch the ball and be in control of the play. One other player Deyak talked about as having a good night was Abby Pleiss.

“She’s a very wise player and she knows how to read the defense and put the ball down when we can get it to her,” Deyak said.

The Tigers will be in action again on Oct. 24 for the first round of sections. The pairings are scheduled to be decided on Sunday.