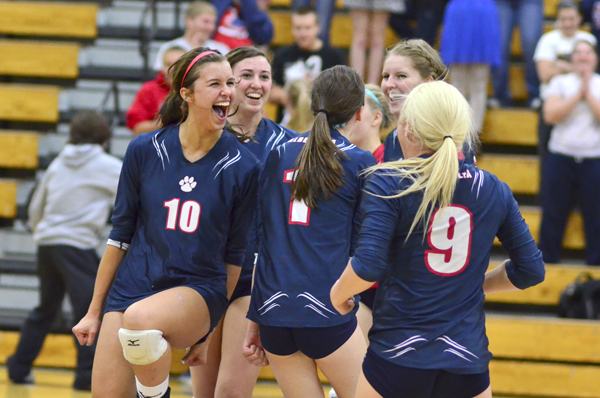 Games one and two were hard fought on both sides, each ending in a two-point victory for the Tigers, 25-23 and 27-25.

In game three, both teams struggled to get any rhythm for most of the game. The Tigers struggled late in the game, which carried into game four as well, and the Panthers went on to beat them 25-15.

“We were just having a hard time passing the ball,” said Tigers coach Lisa Deyak. “The Panthers were doing a good job trying to keep us off our game.”

Struggles continued in game four for the Tigers. Momentum had shifted toward the Panthers in a big way. Serves weren’t being returned, passes were off target and there were net violations by the Tigers. The Panthers jumped to a huge lead of 14-4 and just kept pace the rest of the game to win it by a score of 25-17 to force game five.

“The third and fourth games we struggled a bit,” said Deyak. “I talked to the girls, we changed our lineup to match our defense to their offense, and vice versa.”

Game five had the Tiger girls pumped up, led by captains, Bryn Woodside and Annie Ladwig. The teams went toe to toe all the way up to the score of 7-7, and then the Tigers went on a scoring rampage getting to within one point of the 15 points needed for the win. The Panthers responded by scoring five points of their own before Ladwig got the final kill for the win.

“We had good leadership,” said Deyak. “Both of our seniors, Jensen Goodell and Abby Pleiss, and our two captains, Woodside and Ladwig, their leadership got us the win in game five.”

The Tigers improve to 8-12 on the season and will face Winona on Thursday in Winona.