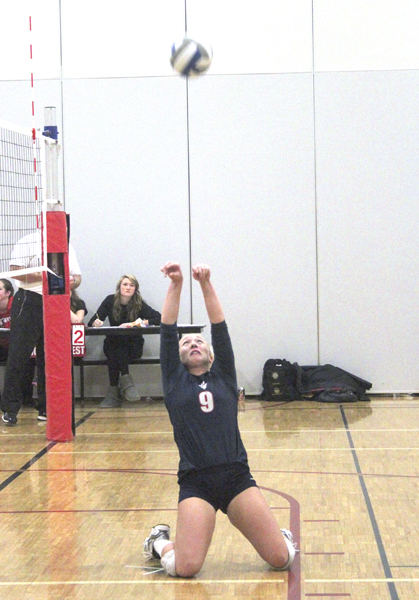 By Kat Ladwig, for the Tribune

The highlight of the weekend for head coach Lisa Deyak was the 2-1 win over Orono, who came into the tournament with an overall record of 12-11-1.

Early in the first set against the Spartans, Albert Lea suffered the loss of starting right-side hitter, eighth-grader Julia Deyak, to an ankle injury. The Tigers lost the opening set 18-25, but the Tiger bench proved its depth in set two, winning 25-21. Coach Deyak said she was proud of the way her players came out to play against Orono.

“Our line-ups all season have been incorporating all our players into the matches, so we are constantly developing our whole team and getting them used to match play,” Deyak said. “When a player gets hurt, our team adapts very easily.”

Albert Lea remained strong in the third set, where senior captain Abby Pleiss and sophomore Kassi Hardies worked hard on the blocking side to slow down Orono’s Jane McKown, a 6’1” offensive force in the middle. Pleiss and Hardies finished the day with three blocks each.

Junior hitter Sydney Rehnelt contributed on offense with well-placed shots to close points for the Tigers, while eighth-grade libero Camryn Keyeski kept communication lines open with her teammates from the backrow.

Setter Bryn Woodside and hitter Annie Ladwig, led by example and helped keep the spark going on both offense and defense. The duo closed the set and match 19-17 with a Woodside set to Ladwig for the winning kill.

“The game went into overtime and at the last timeout, I reminded the team to keep swinging hard at the ball,” Deyak said. “We had a great pass, Bryn set the perfect ball, and Annie crushed it to the floor for the win. Orono had no chance to dig that ball.”

Albert Lea took on Virginia next and swept the Blue Devils 25-18, 25-9, putting the Tigers in the third-place match.

It was a true team effort for Albert Lea on the day. Keyeski and Ladwig led the defense with 40 digs each while Woodside followed with 28 digs. Juniors Sydney Rehnelt and Kelly Kaasa also contributed 22 and 11 digs, respectively.

Ladwig led the offense with 38 kills, followed by Rehnelt with 18, Hardies and sophomore Hope Landsman with 10 and Deyak with five kills.

Woodside commanded the 5-1 offense for the Tigers and ended the tournament with 73 set assists. Woodside also led from behind the line with seven aces while Ladwig and Landsman contributed five and two, respectively.

Deyak said she was pleased with her team’s performance, and felt it was a huge improvement from last year.

“We competed well with everyone we played, and our team continues to improve,” Deyak said. “They are constantly learning, and we’re having a lot of fun, too.”

Albert Lea’s overall record is now 10-15, the best record the Tigers have had in seven seasons. Next, the squad hosts Rochester John Marshall tonight at 7:15 p.m. for its final regular-season match.