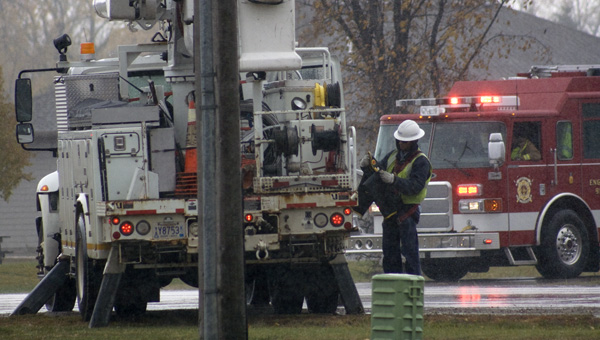 An Alliant Energy worker begins to repair an electrical problem Friday afternoon on a utility pole off of Bridge Avenue. Traffic was rerouted off the street. -- Sarah Stultz/Albert Lea Tribune

A portion of Bridge Avenue was closed for seven hours Friday after what began with an electrical problem on a utility pole.

Bridge Avenue — between Algon and Westron streets — was re-opened to traffic at about 10:30 p.m., according to police.

Albert Lea Police Chief Dwaine Winkels said authorities received a call after 3 p.m. that there was a fire on the utility pole in front of the Herberger’s parking lot at the Northbridge Mall.

Police stated power was out at traffic lights at the intersection of Bridge Avenue and Hammer Road and at area businesses, including the Northbridge Mall and Hy-Vee. It is unclear how many businesses or residences were affected.

Sue Axsmith with the Albert Lea-Freeborn County Chamber of Commerce, said power was out at the chamber and the rest of the mall for about 45 minutes.