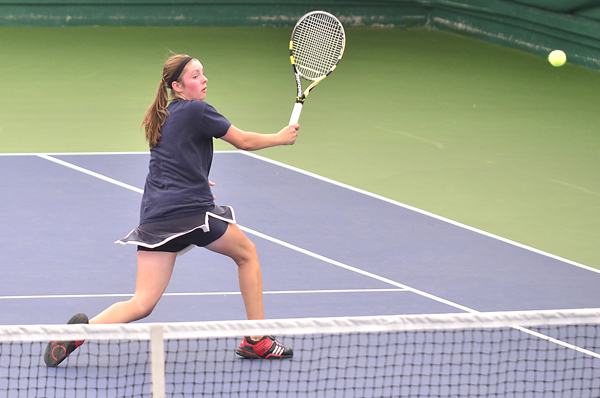 No. 1 seeded Claire Christian, of USC, backhands one over the net during semi-final action of the section 2A Tournament on Monday. Christian would won the match 6-1, 4-6, 6-2 over No. 5 seeded Muotka. -- Buck Monson/Albert Lea Tribune

SAINT PETER — United South Central’s Claire Christian will move on to play in the state tennis tournament next week after playing at the Section 2A individual tournament Monday at Gustavus Adolphus College.

Christian won the semi-finals match over Maddie Muotka of Waseca to advance to the final round. In the finals, Christian fell 6-2, 6-0 to Calleigh Carlson of St. Peter to finish second place in the section.

Christian won the first set of her first match 6-1 with little troubles.

The second set was a wild one. Christian was up 2-1 to start when the Waseca opponent requested a line judge, which can be requested, but usually isn’t.

It seemed as if this move distracted Christian a little as she made more and more mistakes as the set moved along. Christian and Muotka traded games back and forth until her Muotka put it away at 6-4.

Ironically enough, the line judge favored Christian’s calls on every instance and over-ruled all calls that Christian challenged from the opposition.

Christian regained her confidence and played solid to take the win in the third set by a score of 6-2.

“She was playing to win,” said Rebels coach Jill Bailey. “She was moving the ball around well and mixing up the power on her shots to throw off her opponent.”

Up next for Christian was the No. 2 seed, Carlson. Christian got a great start and won the first two games, but unfortunately, that would be it for the USC junior.

“She was off to a good start,” said Bailey. “She was up 2-0 and then it was like a switch was flipped. Carlson turned it on. Really, she played lights out in every aspect of the game. All of her serves were in and she didn’t make any mistakes.”

With the play of her opponent being top notch, Christian forced a lot of errors and found herself on the losing end of the match.

It wasn’t a complete loss, though. With the way she played, she fought for a pass to the state tournament.

“She was excited. Her main goal this year was to make it to state,” said Bailey speaking on behalf of Christian. “She made it. I think next year, since she is a junior and Carlson is a senior, that her goal will be to win section.”

Also in competition was the doubles team of Monica Bye and Kia Legred. They faced off against the No. 1 seeded Waseca team.

They got off to a good start going toe-to-toe with the top seeded team up to game eight, where the score was 4-4. Waseca got a break that gave them game five and the momentum that continued through the match. The USC team lost the first set 6-4.

And, they quickly dropped three games in the first set before going back and forth on games until Waseca ended their hopes beating them 6-2 in the second set.

The Minnesota State High School League state tennis tournament will be Oct. 25 and 26 at the Reed-Sweatt Family Tennis Center in Minneapolis.