Wallace Allen Simunds passed away Oct. 6, 2012, at Sanford Hospital in Fargo, N.D. He was a son of Kathryn T. Simunds and Grant J. Simunds. He was born in Fargo, N.D., at St. Lukes Hospital on Nov. 29, 1925, but lived the first 18 years in Moorhead. He attended schools there and graduated from Moorhead High School in June of 1943. 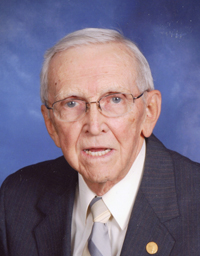 Immediately after graduation, he went to San Diego, Calif., to seek employment at the Consolidated Vultee Aircraft plant, working in the tool control division.

On Jan. 27, 1944, he joined the U.S. Navy and attended boot camp in Farragut, Idaho. Following that, he received training at the Naval Air Technical Training Center in Memphis, Tenn., as an aviation radioman and radar operator. He was later assigned to naval air stations in Whidbey Island, Wash., Jacksonville, Fla., Miami, Fla., Hutchinson, Kan., and Edenton, N.C., before being discharged in Minneapolis in May of 1946.

Following his discharge from service, he matriculated at the North Dakota Agricultural College in Fargo for three years in pre-dental classes. He then applied to the University of Minnesota Dental School in the fall of 1950 for dental training.

Following graduation, he started his dental practice on July 1, 1954, in Albert Lea and continued there for 35 years, retiring to Fargo, N.D., in October 1995, to be closer to family and their lake cabin on Pelican Lake near Pelican Rapids.

He leaves his beloved wife, Pearl, of 61 years; a daughter Joellen (Myron) Skonseng of Fargo, N.D.; a son Mark (Erin) in Lino Lakes; and a grandson Garrett Skonseng, Fargo, N.D.

There will be a visitation from noon to 1 p.m. Friday followed by a memorial service at 1 p.m. at the Lutheran Church of the Good Shepherd in Moorhead.

Memorials to the Hospice of the Red River Valley and/or Lutheran Church of the Good Shepherd, Moorhead. Arrangements entrusted to the care of Boulger Funeral Home. Online guestbook at www.boulgerfuneralhome.com.