‘We need to come together’ 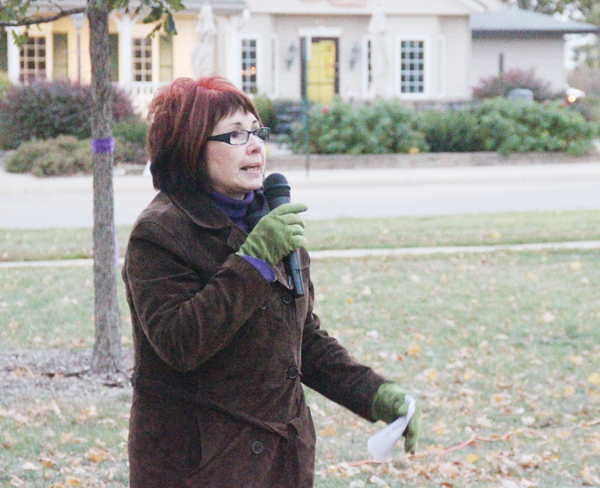 She was only about 3 years old at the time, but Dotti Honsey can still recall her first memory clearly. She was drifting off in the car on the way back from her grandparents’ house when it happened.

“I woke up and my mother was being shoved out of the car,” she said. 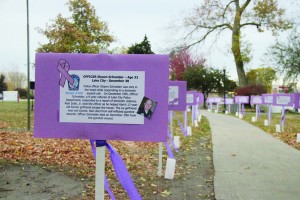 Her father then drove after her mother, chasing her down and trying to run her over. Honsey’s story was one of many that filled the minds of those at Thursday evening’s domestic violence awareness vigil at New Denmark Park. More than 30 Albert Lea residents, including police officers and employees from Freeborn County’s Crime Victims Crisis Center, shrugged off the nipping cold to pay their respects to victims of domestic violence and show their support for survivors.

“I grew up in a household where there was a lot of domestic violence,” Honsey, a volunteer coordinator with the CVCC, told the crowd.

Such an environment can have a strong impact on children, who never know when they’ll come home from school to see a parent with a black eye, she said.

“They live in fear constantly,” Honsey said. “It’s really hard for them to come out of that.”

Her co-worker, Jeannie Jackson, agreed, saying she has never seen a case of domestic violence that has not affected any children involved. They learn to behave from their experiences early on.

“We need to come together and show support,” she said. “They are going to be what they grow up in and what they see.”

People of all ages walked down an aisle of luminaries and memorials, each one devoted to a Minnesotan who died in 2011 as a result of domestic violence. Pinwheels dawdled in the wind, marking those that belonged to children. Organizer and CVCC Social Worker Ilene Grosam said most were collected from newspaper reports.

“It’s just important that the community is aware of the impact of domestic violence,” Grosam said. “It impacts whole families and lives.”

Outside the victim and the perpetrator, the costs for the community include lost work time, hospital fees and the costs of criminal justice. Freeborn’s CVCC works with more than 300 families a year, Grosam said.

Albert Lea Police Department’s Lt. Jeff Strom read several reports of domestic violence in Minnesota, one of them describing a fellow policeman. Lake City Police Officer Shawn Schneider, 32, died from a gunshot wound to the head while responding to a domestic violence call.

The vigil was a way to observe Domestic Violence Awareness Month, which started in October 2005, Grosam said.

Taylor McCullough of Campaign for Kindness and Savile Lord of the Choose Civility group also spoke to show their organizations’ support for the victims of domestic violence. Off to the side was a table with information on domestic violence, purple ribbons to be worn during the month of October and a candle for each victim’s luminary.

In closing her address to the crowd, Honsey called for neighbors to look out for one another. Part of being a community means Albert Leans should be more concerned about what’s going on next door, especially if they hear what they suspect may be violence or mistreatment. Sometimes, that means taking action.