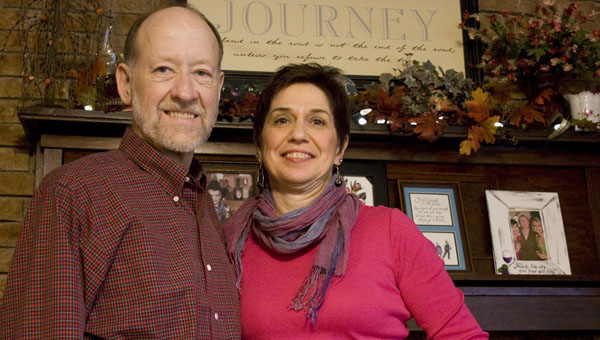 A benefit will be held Sunday at Bethany Hall of First Lutheran Church for Jeff and Mary Laeger-Hagemeister. -- Sarah Stultz/Albert Lea Tribune

Chaplain and his wife are accustomed to helping others, not being helped

For a majority of their lives, Albert Leans Jeff and Mary Laeger-Hagemeister have been on the giving end.

As chaplain of St. John’s Lutheran Home for 9 1/2 years and as a pastor for 26, Jeff’s priority has been to serve people, many of whom are suffering from illness or terminal disease.

So when he found out in June he had Stage 3 pancreatic cancer, the roles reversed, and the couple became on the receiving end for the first time in their lives.

Instead of questioning their experience or being pessimistic about their outcome, however, the couple has gained a renewed faith and made it a priority to learn from it.

“We believe God is with us,” Mary said. “There’s a higher power.”

It was the first part of June when Jeff said he started feeling poorly.

After a few weeks of nausea, loss of appetite and other problems, symptoms started to escalate June 12. He was jaundiced from head to toe, and Jeff called Mayo Clinic Health System in Albert Lea for an appointment.

After meeting with a doctor and going through a series of tests, the next day the couple found out there was a tumor.

“We were stunned,” Mary said.

The following day they met with a doctor at the Mayo Clinic, who confirmed the news.

“To me the C-word always brings some of the worst thoughts,” Jeff said. “I asked, ‘How serious is this? If is something I will be able to combat in some effective way?’”

The doctor scheduled him for surgery the next week, during which the surgeon found the cancer had spread to four lymph nodes and into the blood system.

The doctor ordered him a regime of chemotherapy and radiation.

Though the couple said the odds for pancreatic cancer are not in their favor, and Mary is dealing with her own health problems in the meantime, they have made it a priority to remain positive.

They have been married for 32 years and have learned to overcome some other difficult trials, they said.

“We have had a lot of health issues over that time, but we’ve always gotten through it,” Mary said. “We know we can get through this.”

The first weekend they found out about the cancer, Jeff and Mary began a list called “Lessons Learned.”

On it they write down little things that stick out to them about their experiences.

There are phrases like, “Friends are the best gift,” or “Let people help in ways they can,” along with dozens of others.

This weekend, some of their friends and family have organized a benefit for them.

The benefit will be at Bethany Hall of First Lutheran Church from 11 a.m. to 3 p.m. and will include a soup luncheon, silent and live auctions, music and bars and coffee.

What: Benefit for Jeff and Mary Laeger-Hagemeister