G-E edged out by Houston Public 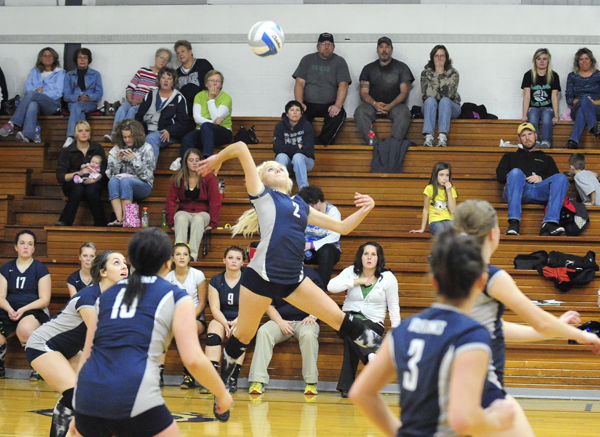 GLENVILLE — Glenville-Emmons (3-8) battled through four games against Houston Public (7-3) on Thursday only to fall 3-1.

“It’s the story of our season,” Wolverines head coach Lisa Ziebell said. “When we have chances to put games away we choke.”

Ziebell said her team didn’t give up trying but lost its momentum to keep playing in the closely matched games.

The Wolverines took a lead over the No. 2 ranked Southeast Conference team from the start winning the first set 25-18.

In the second set, the Wolverines trailed by no more than two points until the Hurricanes went on a five-point run at the end to take the set 25-19.

In the third set, the Wolverines fought back from an eight-point deficit to tie the game at 21. They volleyed with the Hurricanes keeping the scored tied through 23. The final two points, one after a pancake move and one that Glenville-Emmons thought was out of bounds, but was in, were scored by the Hurricanes for a 25-23 Wolverine loss.

To cap off the match, the Hurricanes started swinging and took the fourth set 25-12.

Even though the Wolverines took another loss, Ziebell believes her team played its best game of the year.

“We communicated really well, much better than we have been,” Ziebell said. “We hustled and worked our butts off in the first three sets.”

Ziebell noted that the girls’ hard work of playing over the summer is starting to see some payoff.

Glenville-Emmons made several digs that kept Houston Public from running away with the match.

“It fired the girls up that they were able to finish some of the plays,” Ziebell said. “It was the most fired up I’ve seen them. I think they were ready for a big rebound after a 1-5 tournament. I think they rebounded real well and played hard tonight.”