Youth team one of the best in the state

On Oct. 13 and 14 the Albert Lea Soccer Association 13 and under team competed in the 2012 fall soccer state championships in Rochester. 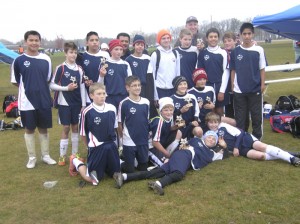 Last year the team won the C3 state championship and was moved to a higher competition level of C2 for 2012 fall season. The team had an undefeated league season and took first place in the Minnesota Youth Soccer Association’s south fall league. By winning, the league the team qualified to enter the state competition with the top six teams in the state.

The first game of the weekend matched Albert Lea and Maple Brook Soccer Association based out of Maple Grove. The Tigers defeated them 3-0. That was the third shutout in a row for the team that dated back to league play. During those three games they outscored their opponents 11-0. The next opponent in the state tournament for the Tigers was a club team from southeast Minneapolis. Both teams entered the game undefeated. The team that won would enter the state finals.

As advertised it was a great battle. The score was 0-0 at halftime with many attacks by both teams in the first half that were all denied by great goalkeeping and defense. The second half opened up better opportunities for both teams and the final score was 2-1 in favor of the southeast Minneapolis squad. They went on to win the next game and claim the fall soccer state championship.

“I am very proud of our boys,” Tigers coach Ramon Huerta said. “They competed hard and made great passes to create great offensive opportunities and played team soccer like we coach. It is a great accomplishment to be in the state tournament and to be recognized as one of the best teams in the state.”

“The team has a bright future,” Lange said.