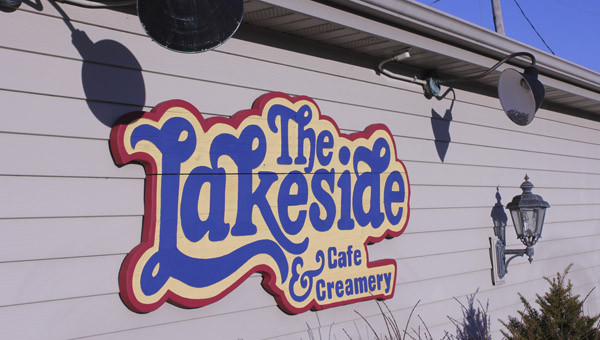 Steve Tubbs, who owns the site of the Lakeside Cafe & Creamery with his wife, painted the sign over the summer. --Tim Engstrom/Albert Lea Tribune

Three well-established Albert Lea businesses shuttered their doors within the past month.

Albert Leans saw the closing of Lakeside Cafe, a name that has a history going back to 1947. And they witnessed 34-year-old formalwear provider Courtly Manor and 10-year-old hair salon Classic Reflections close.

All are closing for differing reasons.

Steve and Debbie Tubbs, owners of Ben’s Floral & Frame, have owned the Lakeside Cafe & Creamery since 1999, when they breathed life into the name of a cherished business. Though their building isn’t the same as the original, which closed in 1988, it is in the same location.

Steve Tubbs said he and his wife knew Albert Lea loved the place, but they had to make a tough decision in closing the eatery. Doing so allows them to test the market for a tenant moving into the location at 408 Bridge Ave.

“We are already talking to several interested parties,” he said.

The space for the Lakeside Cafe offers 13,000 square feet. It is attached to the Tubbs’ primary business, Ben’s Floral & Frame, and it has a sidewalk seating area with clear view of Katherine Island and the Fountain Lake fountains.

Kari Fjeldberg of Classic Reflections Salon & Spa said she closed last week because her mother is ill, the lease is up, and she wants to place family as her top priority.

“This has consumed my life for 10 years, and there are wonderful, great memories,” Fjeldberg said.

The Northbridge Mall location was frequently the center of Minnesota Vikings fans in Albert Lea, as Fjeldberg is known as one of the most high profile fans of the purple and gold in the city. But it also regularly donated hair to Locks of Love and would hold Locks of Love days to collect hair to go toward wigs for cancer patients

She said she will be taking her skills — and her Vikings ways — to Dinah’s Style, 405 E. William St. She said she is certified for master hairstylist, color specialist, nail technician and shellac technican.

The six employees of Classic Reflections are headed to new jobs, Fjeldberg said.

Gene Jesse, owner of Courtly Manor, 137 S. Broadway, said he has decided to close Courtly Manor because of the streetscape work the city is planning on doing for Broadway in 2013. The work will make accessing downtown businesses by automobile difficult for a spell.

Courtly Manor rents and sells tuxedos and gowns, sells bridal dresses and provides accessories and gifts for weddings and celebrations. It also rented out costumes from pirates to Easter bunnies.

Jesse provided the Tribune with a written statement:

“After nearly 34 years in business I have decided to close Courtly Manor. Now is not the time for the streetscape project due to the present economy. I feel this projects is being jammed down our throats by City Hall and the (Albert Lea-Freeborn County) Chamber of Commerce.

“The remark by President Barack Obama that the government built my business proves that he is a liberal college professor who knows nothing about business. My family and employees built and kept Courtly Manor in business, not the government.

“I wish to thank all my loyal customers for the past 34 years. It has been a pleasure doing business with you.”