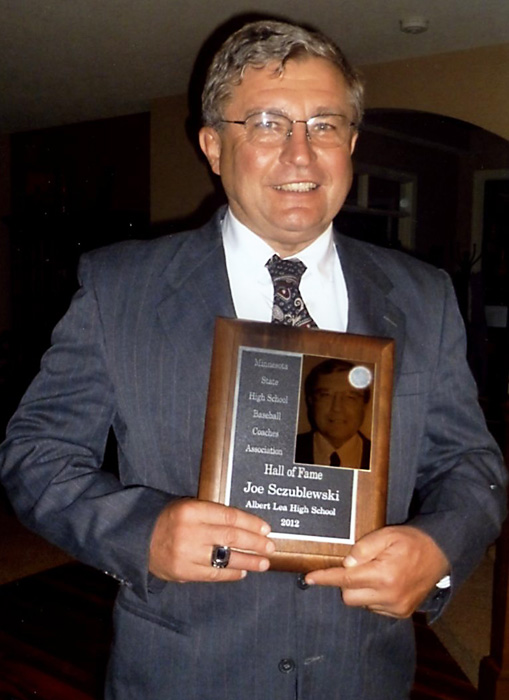 Submitted Coach Joe Sczublewski was inducted into the Minnesota State High School Baseball Coaches Association Hall of Fame on October 27th. He received a plaque and a ring to commemorate the event.

The Hall of Fame recognizes active and retired coaches who have served at least 15 years in a coaching position and have conducted a program in a beneficial way for players, schools and communities.

Sczublewski was joined by seven other coaches for the induction who shared the same passion. According to Sczublewski, without that passion for baseball, none of the coaches would be where they are today. It’s that extra effort and dedication that will get a coach noticed by his community and by his fellow coaches.

Joe has been involved with baseball nearly all his life. In high school, Joe played outfield and also pitched. He batted clean-up in the line-up as well.

He graduated from Little Falls High School before moving onto college.

In college, Sczublewski attended Bemidji State University for four years. There, he was only a pitcher.

“They had this thing where pitchers couldn’t hit and such,” Sczublewski said.

After college, Joe went on to coach at Waldorf-Pemberton in 1976. He spent one year as an assistant coach and one year as head coach there before moving on to Sauk Centre in 1978.

Sczublewski then headed to Albert Lea, where he has remained since, heading into his 24th year as coach of the the Tigers baseball team.

Sczublewski also helped start up the Albert Lea Colonels team in 1990 with Jimmy Johnson and a few others. The Colonels were an amateur baseball team that drew some big crowds in the 90s. That team had its first year without a team in 2011.

“It was fun,” Sczublewski said.He went on to say that the team had struggled in the last few years getting the numbers.

“They need at least 12 or 13 players to survive and they need to show up on a regular basis.”

Since 1990, the Tigers have placed second six times in the conference, according to Sczublewski.

“We were so close,” Sczublewski said. “It seemed like the Rochester teams and Owatonna took turns at beating us for the top spot. We have been to the final four in sections a couple of times.”

The 2013 season is looking promising for the Tigers on the other hand.

“We should have a pretty good season this year,” Sczublewski said. “We have some good kids coming back this year. That makes it fun to look forward to coaching.”

The team will welcome back three All-Conference players as well as another honorable mention coming back.

“The only thing you can hope for is to be competitive and stay away from injuries,” said Sczublewski.

He noted that pitching was where the games are won at this level.

“You really need three good starting pitchers and three relief pitchers to win consistently,” Sczublewski said. “You got to have pitching and defense. Hitting is nice to have, but you can scramble for runs if you need to.”

Sczublewski was honored to join the 75 other coaches that are currently in the MSHSBCA Hall of Fame.

He will continue to coach baseball and plans to take it year by year from here on out.