Memorial service will be at 11:30 a.m. on Wednesday at Bonnerup Funeral Service, Albert Lea. Interment will be in Sunset Rest Cemetery, Northwood. Military honors will be accorded by Albert Lea veterans organizations. Visitation will be two hours before the service at the funeral home. 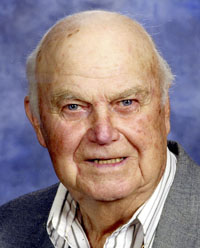 He served his country in World War II in the Army, moving across France and Germany. He was a part of the Greatest Generation.

Returning to Iowa, he and Evelyn began farming in the Pocahontas area where their children were born. In 1960 they moved to the Spring Valley area in Minnesota. They also lived on farms near Dexter, Northwood, and eventually retired in Glenville. He enjoyed going to farm auctions, collecting baseball caps, telling stories and attending family events.

Left to remember him are his sons and daughters-in-law Dennis and Gail, Stewartville; Larry and Peggy, Nisswa; Brian and Betty, Owatonna; and son-in-law Russ Julseth, Northwood. Ten grandchildren, 21 great-grandchildren, and three great-great-grandchildren will treasure their memories of him.

He was preceded in death by his parents, seven siblings, wife Evelyn (1996) daughter Colette (2010) and infant great-granddaughter Ensly (2008).

Memorials may be made to donor’s choice in his memory. Condolences may be sent to www.bonnerupfuneralservice.com or by mail to Bonnerup Funeral Service, 2210 E. Main St., Albert Lea.