Children of all ages at Brookside Education Center will now benefit from large play equipment thanks to grants and fundraisers.

The school houses classes for Albert Lea School District and Head Start, as well as providing day care for the children of students in Adult Basic Education. So year round there are children at the school, and previously there were only small plastic play equipment pieces. Early childhood special education teacher Shelly DeVries has been working on the cause for a few years.

“It’s a huge amount of children that will be affected by it,” DeVries said. 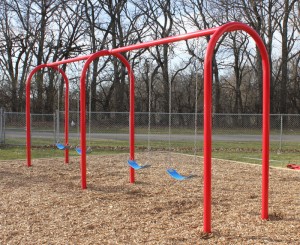 Recently the school was able to acquire a $10,000 grant from the Kenneth Olson Foundation. Before that there had been smaller grants and funds raised from staff donations and garage sale fundraisers.

“We definitely wouldn’t be able to do what we’ve done without that $10,000 grant,” DeVries said.

Just last week a swing set was installed. There’s also what DeVries calls a trike track. It’s a small paved circle where children can ride bicycles and other toys around. Soon there will be a sandbox in the center area.

“It’s still in the beginning stages,” DeVries said. “It’s going to provide the kids with a bigger variety of options for play.”

Other additions include more landscaping and possibly adding trees for shade. DeVries said local Boy Scouts groups and a Scout looking to get his Eagle Scout qualification have been helping with the labor.

DeVries said the school is looking to implement a program called SMART, or Stimulating Maturity through Accelerated Readiness Training. 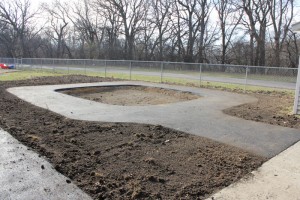 A trike track was recently installed at Brookside Education Center.