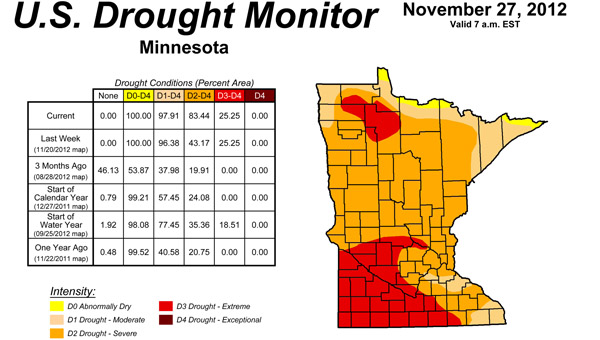 The drought has intensified over the past week across broad swaths of Minnesota.Thursday’s update from the U.S. Drought Monitor shows Tuesday’s status. It reveals that a large portion of Minnesota that had been in a moderate drought is now in a severe drought. Eighteen percent was in a severe drought as of last week. That figure jumped 40 percentage points to 58 percent this week.Areas that became drier include most of the northern half of Minnesota and parts of southeastern and south-central Minnesota.Twenty-five percent of Minnesota remains in an extreme drought, a figure that’s held steady for the past month. That area includes a large portion of southwestern and south-central Minnesota and a pocket of the northwest.Most of Minnesota has been in some degree of drought since mid-September.

Freeborn County and much of southern Minnesota began 2012 listed as being in a moderate drought and through the months progressed through extreme drought into severe drought.

Subsoil moisture across 88 percent of Minnesota’s landscape was said to be short or very short as of Oct. 31.

Stream flows in the driest parts of the state are below their 10th percentile when compared to the historical data, according to the National Weather Service.

“For large portions of Minnesota, August through November 2012 rainfall totals ranked at or below the lowest on record,” the National Weather Service states on its website today.