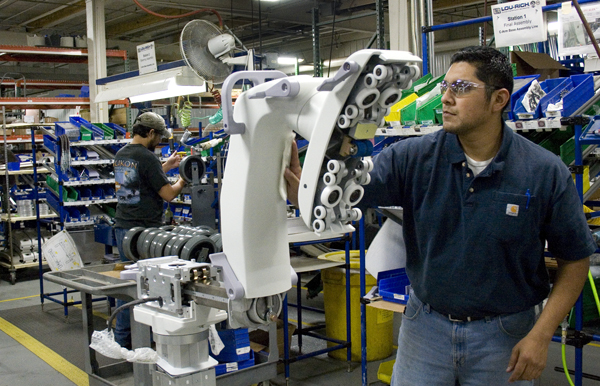 A Lou-Rich employee cleans a piece of medical machinery Thursday in the plant. Lou-Rich’s holding company, Innovance Inc., was awarded last month as Large Business of the Year by the Albert Lea-Freeborn County Chamber of Commerce. -- Sarah Stultz/Albert Lea Tribune

Innovance leaders will be the first to tell you of the importance of investing in small business.

Through the support of their business during the last 40 years, Innovance and its subsidiaries have become one of the Top 5 employers in Albert Lea. Last month it was named Large Business of the Year by the Albert Lea-Freeborn County Chamber of Commerce. 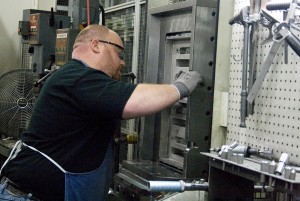 A Lou-Rich employee works Thursday at the plant off of Front Street.

“It was nice to be recognized,” said Business Development Director Doug Olson.

In the last seven years, Innovance, the holding company for Lou-Rich, Exact Manufacturing, Almco and Panels Plus, has taken a more active role in the community through the Albert Lea School District and other organizations such as the United Way, Olson said. The company is a chamber member and has taken on leadership positions within the organization.

The company has also become known for its dedication to its employees.

In fact, during the week Innovance was named Large Business of the Year, Chamber Director Randy Kehr pointed out this dedication to wellness as one of the reasons the company was given the award.

“We want our people to be healthy,” Olson said. “We know healthy people are better workers and are more reliable to show up for work.”

Olson said the company began with the creation of Lou-Rich, a contract manufacturer, in Hayward in 1972 by Louis Larson and Richard Ackland. It has since had a long history in Freeborn County.

In 1989, the company purchased its building in Albert Lea along Front Street.

In 1992, it began to develop into an employee stock ownership program. Today, employees own 92 percent of the company.

In 1998, Lou-Rich purchased Exact Manufacturing, which makes custom extrusions, and in 2001, it purchase Panels Plus, which makes wall panel equipment.

In 2004, Innovance was established as a holding company, and with that it acquired Almco, which makes industrial finishing equipment.

In 2006, Lou-Rich opened its north plant on Y.H. Hanson Avenue, and in 2011, it opened a new shipping dock at its Front Street location.

In all, Innovance has 380 employees.

“We find that once employees come to work here, they tend to like it, and they stay,” Olson said.

Buildings by the numbers:

250,000: square feet of the Lou-Rich, Exact Manufacturing, Panels Plus and Almco buildings off of Front Street

25,000: square feet of the Lou-Rich building in Hayward

50,000: square feet of the Almco building off of Main Street