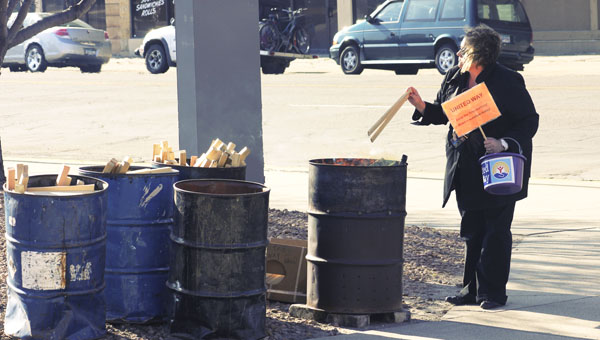 The fire for Keep the Fires Burning is smoldering.

This likely will be the last year the United Way of Freeborn County holds the annual fall fundraiser, said Executive Director Ann Austin.

She said she will approach the board of directors about replacing Keep the Fires Burning with a more effective fundraiser or putting more effort into an existing one.

On Thursday from 7:30 a.m. to 3:30 p.m., about 25 volunteers took turns working shifts on the four corners of Main Street and Broadway. As people made donations, volunteers tossed wood on a fire in a burn barrel near the Wells Fargo Bank automatic teller machine. About $2,840 was raised. 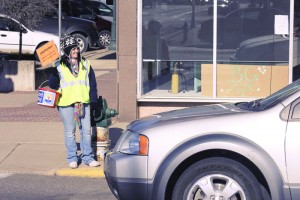 Keep the Fires Burning was held in late October last year and was near Northbridge Mall. It raised $1,500.

Austin hinted that the fundraiser that could ignite out of Keep the Fires Burning’s ashes is the Brookside Haunted Walk. The new event debuted Oct. 26. Costumed performers at Brookside Boathouse did their best to act out scenes and spook visitors. Admission was $5, and it raised $1,900.

“We probably could do it for two days next year,” Austin said.

She said Keep the Fires Burning was a good opportunity to get volunteers from member agencies in front of the public, and being on a street corner was good visibility. Even if people didn’t give, seeing the United Way volunteers holding buckets was a reminder that the campaign is happening.

Keep the Fires Burning was the final fundraiser for the United Way season. Through this morning and into December, the United Way staff and volunteers focus on workplace donations, sending out reminders and asking donors to follow-through before the Dec. 31 fundraising deadline.

The United Way of Freeborn County so far is about halfway toward its $660,000 goal. The United Way support 29 local programs to help people in need through roughly 16 agencies.

Angela Enderson with Senior Resources served as a volunteer with Keep the Fires Burning from 11 a.m. to 1 p.m. She said donations were going well in the morning and slowed during the noon hour.

“Sometimes people are in a hurry or don’t have cash. I never have cash,” she said.

Enderson said people don’t realize just how much good the United Way does for the people of Freeborn County.