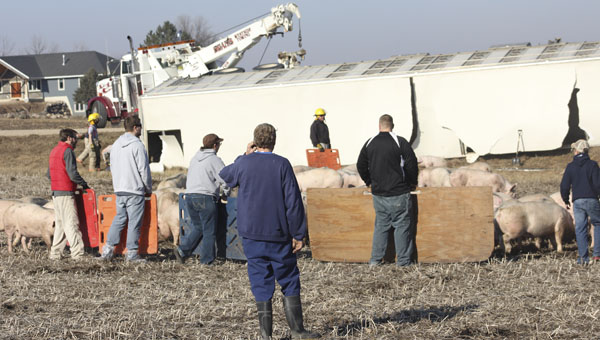 CLARKS GROVE — A driver escaped unscathed when his semitrailer full of hogs tipped over Tuesday morning on a gravel road a mile south of Clarks Grove. 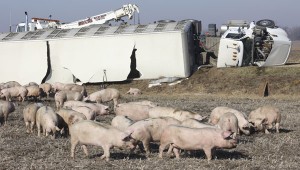 Hogs walk in a harvested field while a truck with Dean's Towing prepares to upright the turned-over tractor-trailer.

The truck belongs to Northfield-based Holden Farms, and the driver said he was hauling about 180 hogs belonging to Chris and Kim Jensen, 76128 270th St.

The driver, Gregg Spidahl of Zumbrota, was not injured and he and Clarks Grove volunteer firefighters helped keep the hogs clustered in the field while Freeborn County sheriff’s deputies and other firefighters tried to remove injured or dead hogs from the trailer.

He said he was taking the hogs to Waterloo, Iowa.

“Once they move a little bit, they go down to the downward side,” Spidahl said.

The rollover happened at about 11 a.m. near 76128 270th St. The tractor, a Sterling, was damaged, too. Spidahl was cited for inattentive driving.