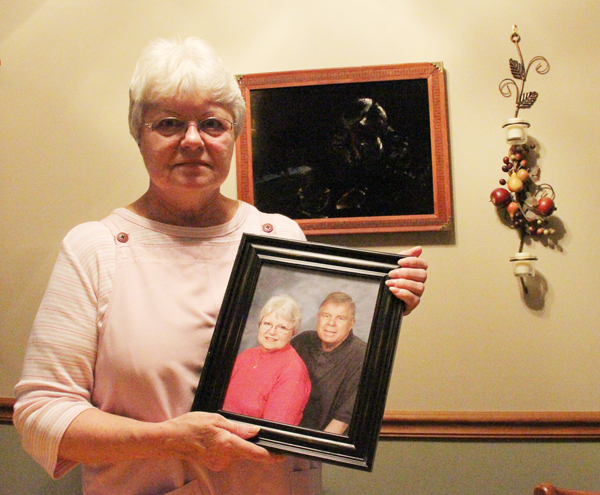 Mary Carlson holds the last photo she and her husband, Mike, had taken together. Mike had hospice care before passing away in September of 2011. --Kelli Lageson/Albert Lea Tribune

Hospice care was a special blessing to an Albert Lea family.

Mary Carlson’s husband, Mike, had hospice care for a few days before his passing, and she said they both considered those days the sweetest of their long, harrowing journey.

Five years ago Mary and Mike moved to Albert Lea from St. Peter to be near their son, J.D., and his wife, Mindy, and their two sons, Dylan and Drew.

“The boys were getting older and 75 miles was too far away,” Mary said.

Mike had retired from 28 years of working as a cook at the St. Peter State Hospital a few years earlier and was starting to have health problems. One of the first hurdles the couple dealt with was Type 2 diabetes.

“We managed to get through that together,” Mary said.

Being closer to their grandchildren was great for Mike, Mary said. They enjoyed visits from the boys and attending various sporting events since moving to Albert Lea. But soon Mary became Mike’s caretaker as he started to battle prostate cancer. Then he had his right kidney removed because of a rare, aggressive kidney cancer. Then they found out about his Stage 4 lung cancer. After starting chemotherapy, Mike was seeing improvements. But a specialist said with cancer that aggressive, it can often move to another part of the body.

“The specialist told us cancer is very tricky,” Mary said.

Cancer was soon found in Mike’s brain, and on Aug. 24, 2011, doctors referred the couple to hospice care. Mike had gone into the hospital that day for another round of chemo, but doctors said it was no longer in his best interest to fight the disease.

“I almost wish that referral had come sooner,” Mary said. “Hospice made that journey so much easier for him.”

Mike was under hospice care, as well as full-time care from Mary, before he died on Sept. 3, 2011. Mary had never heard of hospice before, but the couple always knew they didn’t want Mike to go to a nursing home. Even though Mike had hospice care for just a few days, Mary said it was extremely helpful.

“Those were some of the sweetest days of our journey,” Mary said.

Hospice staff came to Mary and Mike’s home to interview them and educate them about the program. Providers stopped by each day to regulate Mike’s pain medicine and help with any problems. Social worker Jackie Carstens was especially helpful, Mary said.

“Hospice lets you walk through it with a dignity you didn’t know you had,” Mary said. “Your choices and wishes come first.”

With hospice, there’s built-in care for the family members of patients as well. Mike told Mary he wanted her to be able to have help as well. After Mike died in September, Mary still hadn’t gone to a support group meeting that hospice offers. When a worker checked in with her, she finally decided to try it, mostly out of curiosity. She was surprised that she enjoyed the experience, and since then has been attending the meetings for about a year.

“They welcome new people in with open arms and no questions,” Mary said. “The feelings I was experiencing were understood.”

Some in the support group have been coming for four or five years, and some are brand-new. Mary said that’s what makes it a great support group, because people can help others who are going through the same experience.

Mary can now be found being a cheerleader for her grandchildren at all their sporting events. She also volunteers for the Naeve Hospital Auxiliary in the coffee shop at Mayo Clinic Health System in Albert Lea and volunteers at local blood drives. She wishes more people knew about hospice and the great need it fills.

“I think it’s something that is very important,” Mary said.

A look at the lodge at Pheasant Links. The lodge has a full bar, kitchen, fireplace, banquet room, showers, changing... read more