This year’s firearms deer hunting season is over in our area, and there were reports of some nice bucks being taken. After witnessing the closeness of annual deer camps a few years ago I can understand what makes it a special time. 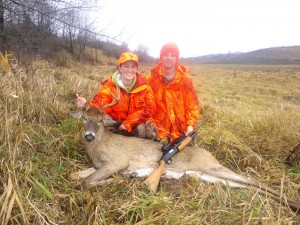 After shooting her first buck, Tribune Sports Editor Brandi Hagen and her dad, Troy Hagen, pose for a photo. — Submitted

Brandi Hagen, the Tribune sports editor, got her first buck this year, and it was a dandy 10-pointer. She has been hunting with her family since the day she passed her firearms safety course. She said that she was hunting with her dad on the day that she got the deer and she felt that it was only fitting that he was there with her because he had taken her on her first hunt when she was younger. Brandi went on to say that she and the other grandchildren would go along with their grandfather and carry BB guns when they were too young to actually hunt.

What a great way to introduce the next generation to the sport.

This is how family traditions are carried on and or started. It is great to know that she and her family will be carrying on their hunting traditions to future generations.

I believe that watching your children and grandchildren enjoy a sport that you yourself have enjoyed for many years makes you feel proud to be passing it on.

I have talked to other deer hunters who said they had a pretty good hunt this year, too.

One particular hunter was pretty excited about the fact that his son had gotten an eight-pointer on their hunt. The dad had also gotten a smaller buck, but when talking to him it was all about what his son had accomplished. These are moments to be cherished and what a great way to start a tradition of their own.

The mild winter that we experienced last year has to be a contributing factor in the hunting success experienced by many this season. We can only hope that this year’s winter won’t be a payback for last year.

Hunting is a great sport, and it doesn’t matter if you hunt birds or four-legged critters — it is all about the outdoors.

In looking back at my youth I can still remember walking the cornfield that once occupied the land by where the disc golf course is at Bancroft Park. It was on Thanksgiving Day, and I was with my two uncles, Harvey and Orville, along with my cousins Bill and Tom. Uncle Orv had let me use his double-barrel .410, which was quite a step up from the trusty Red Ryder BB gun that I toted whenever I ventured out into the wilds of the slough.

Although I no longer pheasant hunt, I still cherish the times that I spent walking the fields in search of that elusive bird. Each season seems to have its own distinct smell, and fall is probably the one that I like the best. It’s hard to describe, but the dead grass and weeds along with the fallen leaves give fall a sort of musty and dry but overall “good” smell. Anyone who has ever spent any time in the woods on a fall day can relate to that smell.

To me, there is no better experience than walking through the woods on the dry and crisp fallen leaves as they crackle under your footsteps.

I have mentioned before that my son Brian had taken me to a couple of spots in the Bricelyn-Frost area that he used to bow hunt. I could never understand why he liked bow hunting so much until I went with him on that day. That’s when I realized that it wasn’t just about the hunt, but the whole package. Just spending the time in the woods on a crisp fall day anticipating the appearance of that big buck could sometimes be enough. Although the ultimate goal is to get your deer sometimes experiencing “the thrill of the hunt” is really what it’s all about.

With a longer season to hunt most bow hunters spend a lot of time trying to get that deer. I would venture to guess that if you asked a bow hunter if it is worth it the answer would be absolutely!

You don’t have to be a hunter to enjoy the outdoors experience. Take a drive to one of the many parks or Wildlife Management Areas that we have available in Freeborn County and see for yourself what nature has to offer.

Until next time, take a little time to enjoy the outdoors experience and the world of nature that surrounds us.

Dick Herfindahl’s column appears in the Tribune every Sunday.