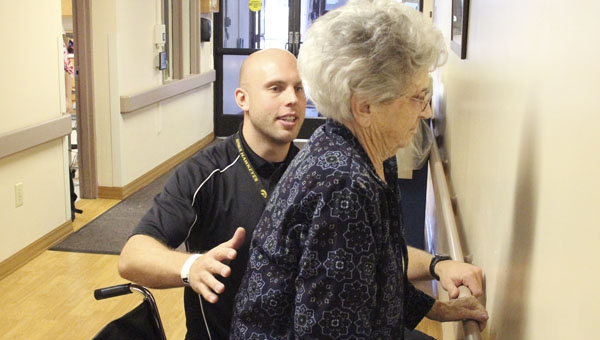 Thorne Crest Retirement Community residents are raving about a wellness program that was recently introduced to everyone living in the community.

One resident, Helyn Langlie, 92, likes her daily wellness class so much that she hates to miss a day.

The former Ellendale-area resident moved to Thorne Crest last January after she broke her hip. For a while she wasn’t moving around much, and then in May wellness classes were opened up to all long-term care residents.

“Without the wellness class I don’t think I could get out of my chair,” Langlie said. “It gives me energy and strength to start the next day.” 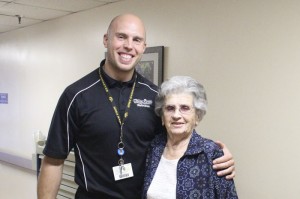 She spoke highly of Wellness Director Weston Hulst and said he’s patient with the residents but also pushes them to try new activities. Some of the exercises include lifting weights, standing up and down, stretching and working on balance.

“It’s such a varied exercise program,” Langlie said. “It works all parts of your body.”

She can feel immediately when she doesn’t do her daily exercises. There are no classes on Sundays, and Langlie said always on Monday she’s ready to get back to class because she’s stiff and in more pain from taking a day off. There’s a social aspect to the classes as well, and Langlie said the residents have a good time while doing their exercises.

“We get to laughing and telling jokes,” Langlie said.

After seeing success in the wellness program from residents in Thorne Crest’s apartments the program was rolled out to all residents. After just a few months, many are seeing dramatic results like being able to walk a few steps after previously being confined to a wheel chair.

“Throughout the building we have a lot of good results,” Hulst said.

Karen Anderson, director of sales and marketing, said not only do residents benefit from the classes, but that in turn helps staff at the facility. Nurses and all other staff say working with residents who can move more on their own is easier and safer.

“It’s good for everyone to practice wellness, but it’s surprising the results they’ve seen,” Anderson said.

The program is doing so well at Thorne Crest in Albert Lea that the regimen is being rolled out to its sister communities in Wisconsin and Iowa.

“They saw that it’s doing some amazing things,” Anderson said.