Funeral services for Janet Ravenhorst will be at 2 p.m. today at the Hollandale Reformed Church. The Revs. Neal Ooms and Perry Raak will officiate. Interment will be at the Hollandale Cemetery. Visitation will be one hour prior to the service at the church. Online condolences are welcome at www.bayviewfuneral.com. 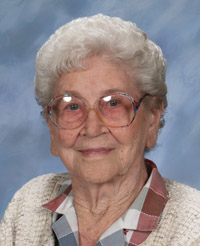 Janet Ravenhorst was born Dec. 26, 1917, in Milaca County to John and Jennie (Timmer) Nyenhuis. She graduated from Pease Christian School. On April 10, 1940, Janet was united in marriage to John Ravenhorst Jr. in Pease. Janet and John then moved to Hollandale where they farmed, and Janet enjoyed being a homemaker. She was a member of the Hollandale Reformed Church. Janet enjoyed flowers and flower gardening, needlework, quilting, baking, traveling and going on cruises in her later years.