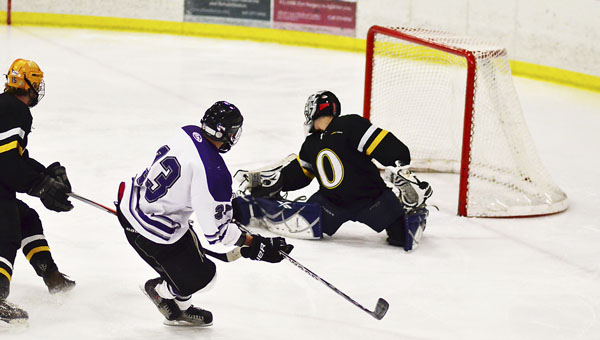 The captain of the Waldorf College hockey team has been playing the sport most of his life.

“I’ve been playing hockey since I could walk,” said Brent Putney, who wears No. 5. “I got going as early as possible.”

In hockey, the captain is the player designated by the team as the only person authorized to speak with the referees regarding rule interpretations when he is on the ice. At most levels of play, each team must designate one captain and two alternate captains, who speak to the officials when the captain is on the bench. The captain wears a “C” on his jersey, while the alternate captains wear an “A”. The captain, usually a well-respected player, may also head up off-ice activities and represent the team in public.

Putney grew up playing hockey in the Twin Cities area. He went from North St. Paul to Cottage Grove to White Bear Lake, where he played high school hockey.

“It was all fun, playing in a big program, you get to play all of your top competition and get to travel everywhere, that was probably the best part,” Putney said. 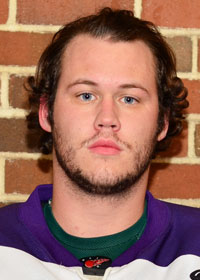 Putney is a sophomore at Waldorf College going for a business major in accounting and finance.

He has been on some successful teams in his hockey career. He has been to the state tournament in both “A” Pee Wees and “A” Bantams, which helps a hockey player in the experience and leadership departments. He came to Waldorf for two reasons, one was to play hockey and the other was to get an education.

“I came down for my visit and I liked the small campus,” Putney said. “I like not just being a number and statistic, I like being somebody at school. If I go on to play pro after this, that would be great, but I’m a student first.”

The Waldorf Warriors are a WCCHA hockey team out of Forest City, Iowa, and play their home games at City Arena in Albert Lea. This is their second year being hosted by Albert Lea. The Warriors have the required allotment of captains on their team and they all seem to have the same goal in mind, and that is to win the conference this year.

Putney said that this year’s team is a hard-working one with skills to achieve that goal.

“We don’t have an outcast on the team,” Putney said. “We are a pretty close-knit team.” 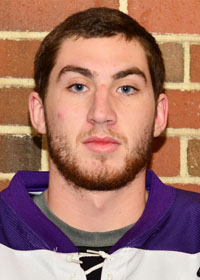 Sophomore Jordan Van Son, who wears No. 33, is one of the two assistant captains on the team. Van Son comes out of Montana where he has played hockey since he was 4. Van Son has a hockey resume that features three high school state championships in Montana and two high school nationals appearances. Van Son played for the Montana Select team and Team Northwest before coming to Waldorf.

“I got recruited to play here,” Van Son said. “I am going to school for business marketing.”

Van Son talked about his most memorable game in his hockey career.

“Senior year of high school, we were down four-to-nothing going into the third period, and I scored four goals to tie it up and go into overtime. We ended up losing the game, but it was cool for a personal accomplishment,” Van Son said.

Van Son hasn’t really put much thought into his personal hockey goals for this year or for the future, but he’s pretty sure on the team goal of a winning season.

“I think we work together well, good team chemistry and you don’t see one hockey player without another one on campus,” Van Son said.

Filling out the second assistant captain spot is sophomore Joshua Bevers. Bevers has been playing hockey most of his life, starting in the mites division. Bevers guessed it has been 16 to 17 years of hockey. The captain position isn’t new for Bevers.

“I was a two-time captain for high school hockey,” Bevers said. “I lived in Blaine, but played for Spring Lake Park.” 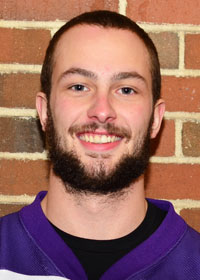 Bevers had a career in high school that earned All-Conference honors in his junior and senior years. His best game came against Totino-Grace his senior year. The team won the game 7-2, and Bevers scored three goals to go along with his two assists.

“That was when they had a couple of Division I commits on their team,” Bevers said. “So that was cool. I also finished third on the all-time scoring for our school, behind David Backes who plays for the St. Louis Blues in the NHL and behind another kid who went on to play for Colorado College.”

Bevers ended up at Waldorf College through a friend and realized that the small town and small school were good to keep his mind focused on school work. And he was excited to get the chance to play hockey. Bevers is going to school for business management and might go into human resources.

This year’s Warriors team has two seniors, one junior and is loaded with freshmen and sophomores.

“There are a lot of young kids that are learning,” Bevers said. “It’s different from high school hockey.

The young Warriors are off to a strong start this year, currently sitting in third place in the conference with a record of 4-3-1 within the conference and 12-4-1 overall. Next up for the Warriors is the University of Minnesota Gophers club team on Nov. 30 and Dec. 1. The games are at Roy Nystrom Arena and start at 7 p.m.