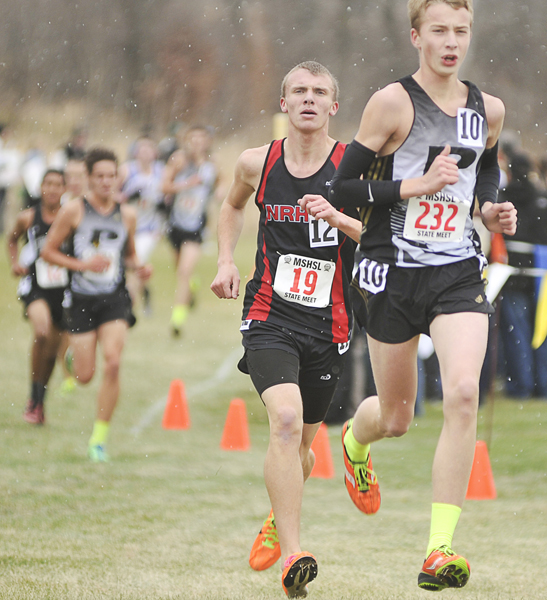 NORTHFIELD —New Richland-Hartland-Ellendale-Geneva junior T.J. Schiltz didn’t do as good as he had dreamed of, but he did a lot better then he could have at the Class A state boys’ cross country meet in St. Olaf Saturday.

Schiltz, who took 89th in state as a sophomore, earned All-State honors as he finished in 17th place this time around.

“My ultimate goal was to get in the top 10, and I wanted to get at least 45th,” Schiltz said. “It’s always fun to come to state, especially coming from an area where there aren’t many really fast runners. Coming up really puts you into perspective with every one else.”

Schiltz finished with a time of 16 minutes, 28.9 seconds and he actually led the race for the first mile and a quarter.

“My goal for T.J. was to place in the top 20 and he was able to manage it,” Panthers head coach Mike Weber said. “It was a high-pressure run and his nerves were really going for the first mile. Then he was able to settle down and get into his groove.”

After falling back, though, he had to find away to move up again.

“That wasn’t a very smart idea,” Schiltz said of taking the early lead. “As soon as the leaders passed me, I just died and couldn’t think of where to go from there. It took me a little while to get back into the swing, where I needed to at least try and get a medal.”

Schlitz had planned on starting slower, but he couldn’t help himself when the adrenaline kicked in from being lined up with the 175 best runners in Class A.

“I was focused on maintaining what we already had instead of trying to get faster,” he said. “I tried to not focus on the nerves, which got me last year and it kind of worked until the gun went off and then I just took off.”

“With a half mile to go, he had enough in the tank to turn on the jets one more time to bump up a couple places,” Weber said. “It was awesome to go from placing 89th last year to making such a huge jump in the field to place as an All-State runner.”