Ritchie: Election turnout to be highest

With less than a week until the general election, Minnesota Secretary of State Mark Ritchie said he is anticipating more voters than ever before in the history of the state. 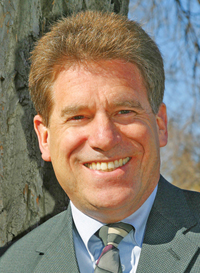 With the growing Minnesota population, Ritchie said he is expecting 3 million people to vote — whether through an absentee ballot or in person at the polls.

The number of absentee ballots received across the state are on track to achieve a 78 percent voter turnout, similar to previous years. He said about 10 percent of people vote by absentee ballot.

While there is some stress that comes with a higher number of voters, he said he is confident in the election system in place.

Ritchie stopped at the Tribune on Wednesday to discuss several election-related issues. He is making visits around the state to encourage educated voting and to answer questions about the steps leading up to Election Day.

He said he and his staff have received numerous phone calls from people in the last few weeks asking whether they are registered to vote, where they go to vote and even what is on the ballot. He noted people can visit mnvotes.org to find out the answers to many of these questions.

The full language to the two proposed consitutional amendments is also on the site.

Ritchie said he and his staff are also dealing with the effects of Hurricane Sandy, including people who are being called out to help with rescue and cleanup. These people are being advised to vote before leaving town.

As of Wednesday afternoon, there were 16 Minnesota ballots stuck at the John F. Kennedy International Airport, and Ritchie said he hoped they would be able to be sent back to the state soon.

Absentee ballots will be accepted through the end of Election Day.

He wanted to remind people who are planning to be out for the deer hunting season to remember to vote this week before hunting begins.

The Freeborn County Auditor-Treasurer’s Office will be adding additional hours to accommodate voters from 10 a.m. to 3 p.m. Saturday.