Rivalry of Packers and Vikings is the best

These names are a big part of a storied rivalry that takes place at Lambeau Field this Sunday. The Packers versus the Vikings is the best rivalry in the National Football League because of the history, the legends and Brett Favre. This rivalry for me is the best because I grew up a huge Packers fan who went to games at Lambeau Field in the ’70s and ’80s. 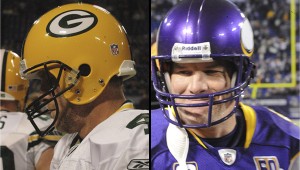 Brett Favre in 2008 wore a Green Bay Packers uniform. By the next year he was wearing a Minnesota Vikings uniform. -- Scott Schmeltzer/Albert Lea Tribune

My relatives are all die-hard Packer backers, and I am happily a huge fan. The other part of making this a huge rivalry is that I have lived in Minnesota for more than 20 years. I have lots of friends who are Vikings fans, and I always hear them saying “Skol Vikings” a lot. Now most of my Vikings friends are pretty decent, but some border on annoying.

Either way, I do respect the dedication that they show. I hope they understand my dedication as well, and well … this is what makes it fun. A few games in this great rivalry really stand out for me.

Big game No. 1: On Oct. 5, 1998, Vikings rookie Randy Moss made his “Monday Night Football” debut at Lambeau Field and had five catches for 190 yards and two touchdowns in a 37-24 Vikings win. This was Randy Moss’ coming-out party, and I hated him. But he was very good.

Big game No. 2: In a “Monday Night Football” game on Nov. 6, 2000, the Packers and Vikings were tied at 20 in overtime when Brett Favre threw a long pass that Vikings cornerback Cris Dishman deflected toward Antonio Freeman, who was on the ground. The ball went straight from Dishman to Freeman’s shoulder, who then rolled over to make the catch at the 15-yard line. Freeman then took it into the end zone for the touchdown and the 26-20 win. It was a fantastic birthday present for me.

Big game No. 3: Jan. 9, 2005, the Moon game and not Warren! The Vikings won 31-17, but after his second touchdown, Vikings wide receiver Randy Moss faux mooned Packers fans. This single gesture overshadowed both Vikings quarterback Dante Culpepper, who threw four touchdowns, and Packers quarterback Brett Favre, who threw four interceptions for Green Bay at Lambeau Field. Did I mention it was a playoff game? I have not liked Randy Moss since. Wait, I have never liked him.

The Grudge Match Nos. 1 and 2: “Monday Night Football” earned the highest ratings in cable television history on Oct. 5, 2009, when the Vikings hosted the Packers. The game was the first meeting between the Packers and their former quarterback, Favre. The Vikings won this game 30-23. This game was like a Super Bowl-type hyped game because of the historic circumstances of the Favre situation.

Payback: The Packers ended Brett Favre’s winning streak against them in a 28-24 win at Lambeau Field on Oct. 24, 2010. Three Favre interceptions and much crying about the officials by Vikings coach Brad Childress could not stop this excellent redemption against Favre.

Payback No. 2: Nov. 21, 2010, in a rematch of the very close 28-24 game, the Packers routed the Vikings 31-3 behind four Aaron Rodgers touchdown passes. I was lucky enough to be on the sideline for this game and predicted that because of this loss, which was in the Metrodome, that Childress would be fired by the Vikings. And guess what? Yes, the next day, Childress was gone.

Oh, the Vikes were also 3-7. I loved the 2010 season. Oh, did I mention that the Packers won the Super Bowl to wrap up this season? Well, now I did.

Actually the Packers-Vikings matchup, which started in 1961, is amazing in how unbelievably close it has been for over six decades. The Packers have won 53 games and the Vikings 48. The Pack has scored 2,178 points and the Vikings 1,967. All these years and the separation are a mere five games and only 211 points.

Here is the decade breakdown:

So my prediction is Green Bay 31 and the Vikings 21. Both teams are fighting for a playoff spot and this will be a great game. Go Packers.

If you want to hear an amazing voice this weekend, join me to listen to Alison Scott at 7:30 p.m. Saturday at the Lighthouse Event Center in Albert Lea. You will be very happy that you did.