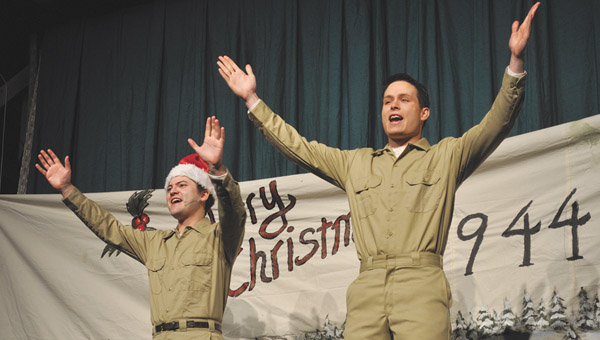 AUSTIN — Even with no snow in sight, Austin may not need to dream to get a white Christmas.

“White Christmas” is a modern theatrical adaptation of the classic 1954 film. World War II veterans Bob Wallace and Phil Davis have a successful song-and-dance act, and the two follow a duo of singing sisters to their Christmas show at a Vermont lodge owned by Bob and Phil’s former army commander. The show features Irving Berlin classics, including “Blue Skies,” “I Love a Piano,” “How Deep Is the Ocean” and “White Christmas.”

“White Christmas was an easy choice for us this season,” said Riverland Theatre Director Lindsey Duoos Williams. “Irving Berlin wrote some of the greatest melodies of the last century, and it’s wonderful to see our students falling in love with these songs the same way that previous generations have. White Christmas made its Broadway debut in 2008, so it’s actually a new musical, but it’s based on the classic, so it feels just like an old-fashioned show.”

Tickets to White Christmas are $15 at the Riverland Box Office, located in Room E107 in the East Building of the Austin campus. Box office hours are Monday through Friday, 11 a.m. to 1 p.m. and one hour before performances. Riverland students receive two free tickets to each performance with a valid student ID.

Contact the box office at 507-433-0595 or boxoffice@riverland.edu. There will even be a surprise at the end for those who attend.