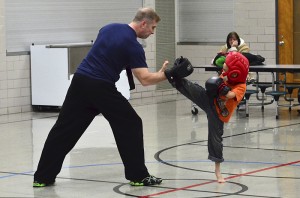 Bullying is a hot topic lately.

One way to help kids deal with the physical part of bullying is by learning self-defense. 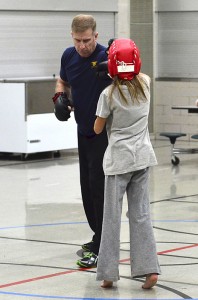 During those 20 years, Wood has taught more than 1,000 students in self-defense and martial arts. The organization that Wood works for is called the Young Americans Schools of Self-Defense and it operates out of Lakeville for the state of Minnesota. The program is currently in about 20 states in the country. The organization was started in 1965.

“We teach self-defense and martial arts to any student that is 4 years old and older,” Wood said. “The students are learning different martial arts techniques and skills to protect themselves from the six primary categories of attack.”

The six forms of attack are: frontal, side, rear, weapon, gang and non-standing upright attacks.

The class does not condone fighting. They only teach students how to protect themselves if they should be attacked. The students also learn to recognize potentially threatening situations. The students learn to call 911 or contact proper school officials when situations come up.

“They are learning to make sure that people don’t harm them, abduct them or violate them in any form,” Wood said.

The classes Wood instructs are 45 minutes of instruction. They are teaches are held at three different times during the year for a 12-week duration each time. Students earn their belt status as they continue in the program as well.

“In the 20 years that I have been teaching,” Wood said. “I have only had about 12 to 13 students that have attained a black belt, and none of the students in Albert Lea have reached a second-degree black belt.”

At the end of each semester students are tested for their next belt rank. Meaning the students cannot skip belts if they are advanced in the class. Each student must go through the belt ranking in order.

The belt colors in ranking order are: white, yellow, green, purple, brown, red and black. Each color, other than white, has a second degree. For example, second degree green belt would be called a green belt with purple stripes.

Also, at the end of the year, the Young Americans School of Self-Defense holds a state tournament. This year it is on Dec. 1. Every student that attends will receive a champions trophy, which is awarded for participation. They can also win trophies by placing in competition.

According to Wood, around 20 to 25 Albert Lea students participate each year and they perform well.

Every student that participates will compete against kids of the same age and belt rank in the tournament.