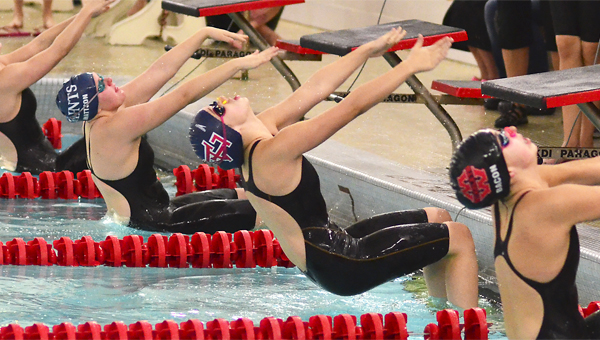 Bailey Sandon launches herself into the 100-yard backstroke. Sandon set a school record and qualified for the state tournament in the event. --Buck Monson/Albert Lea Tribune

AUSTIN — It was just another typical record breaking night for the Albert Lea swimming and diving team.

The Tigers placed third in the section meet held in Austin Friday night.

“It was a great meet for us,” Tigers coach Jim Schmitz said. 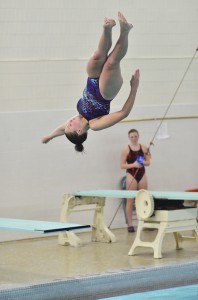 Karli Kriewall qualified for state on Friday night during the section meet held in Austin.

The night started out with the Tigers’ 200-yard medley relay team setting a new section record and beating their own record they just set two nights ago in the qualifying meet. The girls timed in at 1 minute, 50.03 seconds beating their old record of 1:50.15. The girls also set an Austin pool record and an Albert Lea school record with that time.

“What a fantastic job in the medley relay by that bunch of girls,” Schmitz said. “We are really excited about that medley relay. We think that’s got a good shot at maybe a title up there at state.”

In the 50-yard freestyle, Horejsi finished second and advanced to state, while Anna Andersen just missed qualifying for the state tournament. Horejsi and the winner, Danielle Nack, finished about two-tenths of a second apart.

Andersen did however qualify for state in the 100-yard freestyle event with a time of 54.60 seconds.

Karli Kriewall finished third in the diving portion of the meet, but it wasn’t easy, as she had to earn it.

“Karli coming from behind, and making state again was great,” Schmitz said. “I think she will have a great meet there.

The 200-yard freestyle relay team of Andersen, Haley Simon, Ahnika Jensen and Horejsi qualified for state while finishing third in the event. 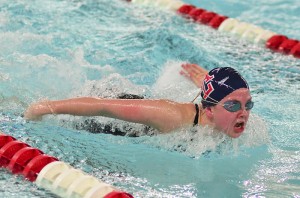 Haley Simon competes in the 200-yard freestyle event during the section meet held in Austin of Friday.

Bailey Sandon had a breakout performance in the 100-yard backstroke to qualify for the state meet.

“A big swim from Bailey Sandon,” Schmitz said. “She has come a long way this year. She set the school record. The best backstroker that Albert Lea has ever had, which really says a lot. An amazing swim by her.”

Horejsi continued her dominance in the 100-yard breaststroke event and easily qualified for state. She took second in state last year by less than a half a second.

“And then the breaststroke, Lindsey set the section record with the best time,” Schmitz said. “She was a little tired at the end. There’s going to be huge things for her at state.”

“Samantha was just six tenths of a second away from making state,” Schmitz said. “We are happy with that as well.”

Last year the team finished 10th in state with only five events competed in. This year they will be competing in seven events, and according to the coach, they are much stronger this year in each of the events.

The individuals that qualified to state will swim at the University of Minnesota Aquatic Center Thursday through Saturday.