‘Best player on the ice’ 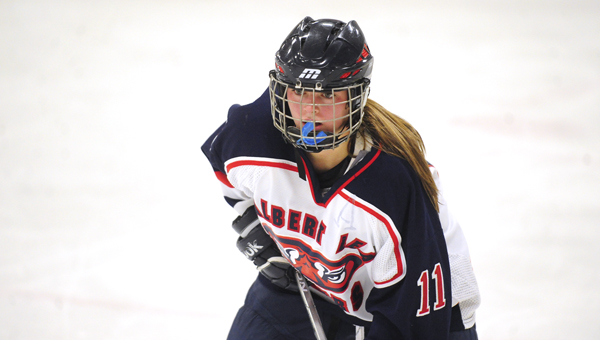 Scoring four goals in the second period for a total of six in the game Albert Lea junior, Anna Anderson, led the girls’ hockey team to an 11-0 win over Fairmont Tuesday at Roy Nystrom Arena.

“Anna put on a clinic out there tonight,” Tigers head coach Paul Willett said. “She really played well. She controlled the game from start to finish and quite simply, she was the best player on the ice.”

In addition to six goals, Anderson assisted two others.

“Anna is probably the leading scorer in the state,” Willett said. “I’d be surprised if anybody is ahead of her.”

The Tigers kept the puck in scoring territory for most of the game and outshot the Cardinals 50-16.

Willett said passing and puck handling are two things the team has been working on in practice and in Tuesday’s game it showed.

The hard work is going to have to continue if the Tigers want to add to their wins, though.

They only have 10 skaters, one goalie and lack any seniors on this season’s roster.

Because of the roster, the team has put new systems into play and are working to grasp them.

“It’s going to be awhile before we have them down, but once we do, we’ll be a better hockey team,” Willett said.

For the game against the Cardinals, though, it didn’t seem to matter.

The Tigers had three scorers in the first period including Anna Englin on the first goal with 11 minutes, 9 seconds remaining, Anderson with 9:14 remaining and Sarah Savelkoul with 3:57 remaining.

The Tigers doubled their lead in the second period.

Hannah Savelkoul scored while the Tigers were short-handed less than four minutes in and Anderson scored twice in a row, once on a power play, before pucks really started to slide.

Fairmont held its ground more in the third period only allowing Albert Lea nine shots on goal and held off any more goals for nearly nine minutes.

But, Anderson dumped one more in with 8:10 left in the game and Ashley Willett capped it off at 11-0 with a goal at the five-minute mark.

“I’m pleased with our performance tonight,” Willett said. “I’m happy that we were able to keep some of the pressure on them and finish off some scoring chances.

The Tigers’ next game is Thursday at New Prague. The game is scheduled for 7:30 p.m.