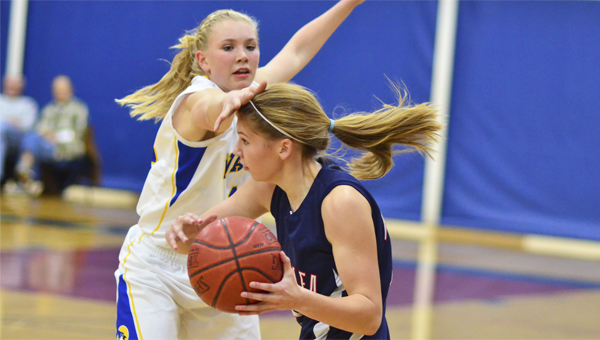 Sydney Rehnelt takes one for the team as she brings the ball up the court on Tuesday night against Waseca.

The Albert Lea girls’ basketball team started out its season with a loss to Waseca on Tuesday night in Albert Lea.

“It was a good effort for our first game,” Tigers’ first-year head coach Lindsey Hugstad said. “We have a lot of things to work on. Our nerves should be settled now and we should be able to come out with more confidence in our next game.”

The girls struggled to make passes and had foul trouble. Sydney Rehnelt was forced to take a seat on the bench after picking up her third foul around the midway point of the first half. Rehnelt would later foul out of the game in the second half.

“We really could have used Sydney more,” Hugstad said.

Waseca went on a 13-0 run while Albert Lea dealt with passing errors and foul troubles. The scoring run put Waseca up 18-7.

The Tigers did mount a charge at the end of the first half and pulled to within four of Waseca at the buzzer. The score at the half was 20-16 in favor of Waseca.

“We had 17 turnovers in the first half,” Hugstad said. “We need to take care of the ball and get good shot opportunities.”

Waseca opened the second half with a five-point run giving them a nine-point advantage right off the bat. The teams battled back and forth for much of the second half until Waseca went on yet another run to take a 40-31 lead.

Albert Lea answered right back, led by Bryn Woodside on both offense and defense, and pulled to within two points of Waseca. The score was at 40-38 with just around two minutes to play.

The crowd was cheering, and the girls had confidence going into the final two minutes of the game.

Waseca wasted no time and retaliated with two 3-pointers to deflate the Tigers and the crowd. The girls did not give up and played hard until the buzzer sounded, losing the game by nine points.

“We had good opportunities in the game, we had good lay ups. Overall, I’m proud of the way they competed,” Hugstad said.

Waseca shot 42 percent on 12 shots from the 3-point range in the game while Albert Lea only made one 3-pointer on two attempts.

“I thought Bryn and Lindsey worked their tails off,” Hugstad said. “They did a great job of pushing the tempo.”