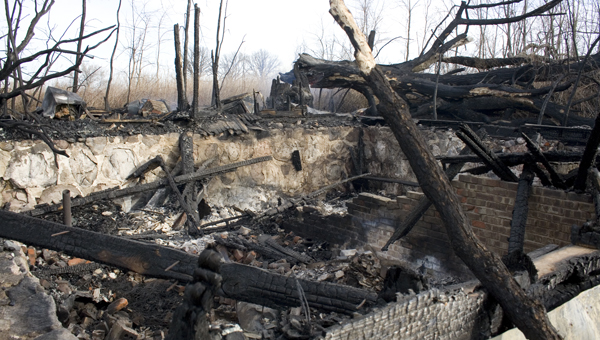 Nothing but rubble remains at the site of an abandoned house, 29875 780th Ave., north of Clarks Grove, after a large fire there Monday night. — Sarah Stultz/Albert Lea Tribune

CLARKS GROVE — Authorities are continuing to investigate a fire late Monday night at an abandoned farmhouse north of Clarks Grove.

The house had been abandoned for close to 15 years but had been purchased in October by Owatonna man Michael Wesely, according to Freeborn County Sheriff’s Office Patrol Sgt. Tim Bennett.

“We have very, very little to go on right now,” Bennett said. “Is it an arson? Is it an accident?”

He said there was no electricity to the house.

Authorities were alerted to the fire, at 29875 780th Ave., at 10:22 p.m. Monday from someone driving north on Interstate 35. The caller stated there was a fire west of the interstate that was large enough to include a structure.

Bennett said when Clarks Grove firefighters first arrived the two-story house was completely engulfed. But by the time authorities figured out how to get to the structure — the driveway was torn up sometime in the past year — the house had completely collapsed, he said. The only way to get to the house was through a plowed cornfield.

Only the foundation and some smoldering debris remained Wednesday morning.

Bennett said authorities believe the fire began at about 10 p.m. A witness who drove by about 20 minutes prior reportedly stated the house was not on fire at that time.