Colette Hendrix and David Altfillisch of Minneapolis were married at 2:30 p.m. Oct. 6, 2012, at Christ the King Church, Minneapolis. The Rev. Dale Korogi performed the double-ring ceremony.

Mother of the bride is Dolores Juarez Hendrix, of Naperville, Ill. Parents of the groom are Gary and Steph Altfillisch, of Albert Lea. 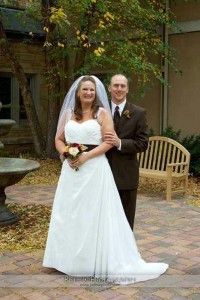 Flower girls were Bianca Juarez, cousin of the bride, of Glen Elyn, Ill.; and Lauren and Elena Altfillisch, nieces of the groom, of Sherwood, Wis.

The bride is employed at Gittleman Property Management, and the groom is employed with Wells Fargo’s auto finance department.

A reception was held at Embassy Suites in Bloomington.

After a honeymoon in Mission Beach, Calif., the couple resides in Minneapolis.