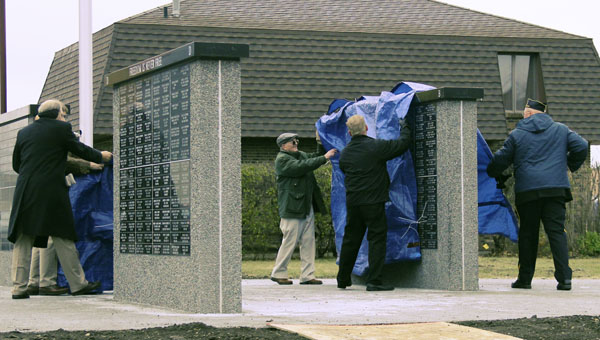 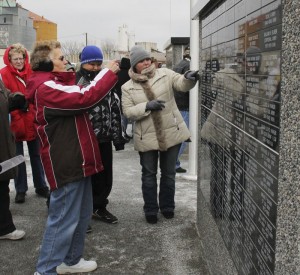 People gather to take photos and look for names on the memorial walls at the new Area Veterans Memorial Park in Wells. --

Though the park is in Wells, it honors veterans of all wars from the communities of Alden, Bricelyn, Easton, Delavan, Freeborn, Kiester, Minnesota Lake, Walters and Wells. A committee was started more than two years ago by Maynard Heitner and Gordon Hansen, who both agreed the community was in need of a place to honor veterans.

“He’s a veteran of the Navy — World War II — and I’m not a vet, but that doesn’t mean I don’t love what we’re working for,” Heitner said. “This is the answer to a dream.” 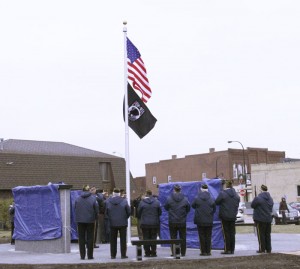 Members of the color guard of the Wells American Legion and area post commanders gather to raise the American flag at the new memorial park in Wells. -- Kelli Lageson/Albert Lea Tribune

Four granite walls show 686 veterans’ names, rank, military branch and dates of service. There is space for an additional 338 names, and engraving will be done on-site once a year. Hansen says the memorial is important to the community and worth all the work that has been put into it.

“We worked together on this for many months,” Hansen said.

The park was dedicated at 1 p.m. Sunday. The welcome was by Gary Hagen, one of the committee members for the park. A chaplain, Paul Baker, retired Army colonel, gave the invocation. 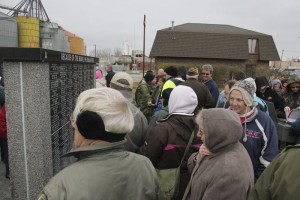 More than 250 people gathered in Wells on Sunday for the dedication of the new Area Veterans Memorial Park. --

The Wells American Legion color guard and area post commanders raised the American flag that stands in the middle of the four granite walls, and the Mankato Riverblenders quartet sang the national anthem.

“We have come together to honor and thank our hometown heroes,” Hanson said. 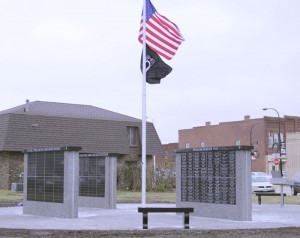 The new Area Veterans Memorial Park has just one phase completed. The first phase included the four granite walls and granite benches. The next phases include adding sidewalks, flag poles, a gazebo and more. --

Committee members next unveiled the four granite walls bearing names of past military members. Hagen spoke to the crowd to say that the memorial is inclusive of all branches of the military and all wars. It even has two names of local veterans who served in the Civil War.

“It’s meant to honor the courage and sacrifice of all our heroes,” Hagen said.

A committee member and U.S. Marines veteran, Gary Kauffmann, said as a Wells resident that he appreciates the support from the town.

“If it wasn’t for our veterans we wouldn’t be here,” Kauffmann said. “I’m so proud my name is on the wall.”

Kauffman said his son’s name and the names of some of his friends also appear on the walls.

“A memorial like this is one of the better things a town can have,” Kauffmann said.

The ceremony ended after the Mankato Riverblenders, with help from the crowd, sang “God Bless America,” and after a 21-gun salute and the play of “Taps.”

The memorial shown is in its first phase, including four granite walls, some granite benches and a directory. The committee has hopes to someday add flagpoles that display the five branches of service, sidewalks, a gazebo, a memorial especially to honor veterans who have been killed in action and more.

The Wells community had a full day of activities for Veterans Day. The Wells Area Jaycees held a 5k run/walk at 11 a.m., with proceeds going to the new memorial park. After the 1 p.m. dedication ceremony there were refreshments served before people were encouraged to visit the Wells Depot Museum.

The Easton Legion commander, Chelsea Schultz, had a demonstration titled “The POW Remembrance Table” at 2 and 3 p.m. at the museum. Then the Wells American Legion Auxiliary held at turkey dinner from 4 to 6:30 p.m.

Registration forms are available from committee members for those wanting to add a name to the memorial’s walls. Engraving is $175. Donations are also being accepted and are tax-deductible.