Will Black Friday sales creep into Thanksgiving for good?

NEW YORK — This season could mark the end of Black Friday as we know it.

For decades, stores have opened their doors in the wee hours on the day after Thanksgiving. But this year, major chains such as Target and Sears ushered in customers on Thanksgiving itself, even before the turkey leftovers had gotten cold, turning the traditional busiest shopping day of the year into a two-day affair. 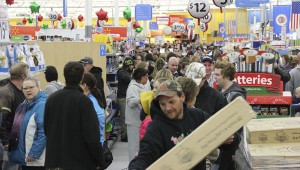 A man places a discounted grill in his cart at 8 p.m. Thursday when Black Friday sales began at Walmart in Albert Lea. -- Tim Engstrom/Albert Lea Tribune

Despite an outcry from some employees, both stores and shoppers seemed to like it. Some people went shopping with a full belly, going straight from the dinner table to the stores. Others slept off their big meal and went to the mall before daybreak on Black Friday.

“I ate my turkey dinner and came right here,” said Rasheed Ali, a college student in New York City who bought a 50-inch TV for $349 and a sewing machine for $50 when Target opened at 9 p.m. on Thanksgiving. “Then I’m going home and eating more.”

This new approach could become a holiday shopping season tradition.

“It’s Black Thursday and Friday combined,” said Jackie Fernandez, a retail expert at the consulting firm Deloitte. “This is going to be a new normal of how we shop.”

It won’t be clear for a few days how many shoppers took advantage of the Thanksgiving hours. But about 17 percent of people said earlier this month that they planned to shop at stores that opened on Thanksgiving, according to an International Council of Shopping Centers-Goldman Sachs survey of 1,000 consumers.

Meanwhile, 33 percent intended to shop on Black Friday, down 1 percentage point from last year. Overall, it is estimated that sales on Black Friday will be up 3.8 percent to $11.4 billion this year, according to technology company ShopperTrak, which did not forecast sales from Thanksgiving Day.

The Black Friday creep began in earnest a few years ago when stores realized that sales alone weren’t enough to lure shoppers, especially with Americans becoming more comfortable buying things online. Opening on Thanksgiving was risky, with some employees and shoppers complaining it was almost sacrilegious.

But many stores evidently felt they needed an edge, especially this season, when many Americans are worried about high unemployment and wondering whether Congress will be able to head off tax increases and spending cuts before the U.S. reaches the “fiscal cliff” in January.

Overall, the National Retail Federation estimates that sales in November and December will rise 4.1 percent this year to $586.1 billion, below last year’s 5.6 percent.

“Every retailer wants to beat everyone else,” said C. Britt Beemer, chairman of America’s Research Group, a firm based in Charleston, S.C. “Shoppers love it.”

At Wal-Mart, the world’s largest retailer, most of its 4,000 U.S. namesake stores are already open 24 hours year-round. But the chain added special sales at 8 p.m. on Thanksgiving, two hours earlier than a year ago.

The company said that its start to the holiday season was “the best ever,” with nearly 10 million transactions and 5,000 items sold per second from 8 p.m. to midnight on Thanksgiving.

Toys R Us opened at 8 p.m. on Thanksgiving, an hour earlier than last year.

Macy’s, which opened at midnight on Thanksgiving, had 12,000 customers wrapped around its store in New York’s Herald Square.

The earlier start also meant the violence associated with shoppers fighting for bargains likewise began earlier. On Thanksgiving night, a couple was struck by an SUV while walking into a Wal-Mart in Washington state, and in Texas, shoppers scattered when a man who got punched during a fight at a Sears store pulled a gun. Two people also were shot and wounded in Tallahassee, Fla., on Friday in a disagreement that police believe was over a parking spot outside a Wal-Mart.

Julie Hansen, a spokeswoman at Minneapolis’ Mall of America, the nation’s largest shopping center, reported that 30,000 shoppers showed up for the mall’s midnight opening, up from 20,000 last year. “This was additional dollars,” Hansen said. This year, 200 of the 520 mall tenants opened at midnight following Thanksgiving. That’s double from a year ago.

To be sure, it’s not clear whether the longer hours will turn into extra dollars for retailers, or whether sales will simply be spread out over two days.

The Thanksgiving openings appeared to create two waves of shoppers — the late-nights and the early birds.

Sam Chandler and his wife, Lori, were among the night owls. They started shopping at midnight on Thanksgiving. By the time they reached the Wal-Mart in Greenville, S.C., early Friday, they had already hit several stores, including Target and Best Buy.

“We’ve learned over the years, you have to stand in line early and pray,” Sam said.

Stu and April Schatz of Rockland County, N.Y., went to the Garden State Plaza mall in Paramus, N.J., which didn’t open until 7 a.m. on Black Friday, because they didn’t want to deal with the crowds that show up late on Thanksgiving night.

“It’s so much more civilized going in the morning,” said April Schatz, a teacher. “We wanted to enjoy our evening.”