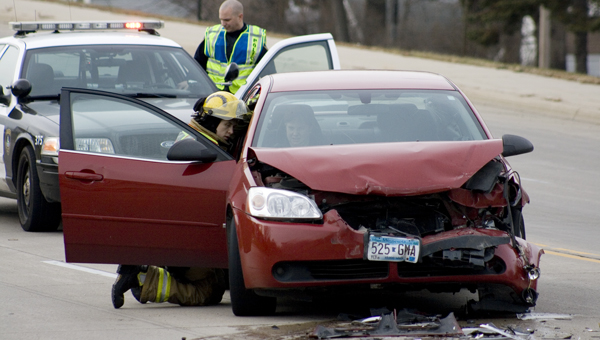 Sixty-year-old Herman Hernandez of Albert Lea was transported by ambulance to Mayo Clinic Health System in Albert Lea, and three others were taken to the hospital by private vehicle. 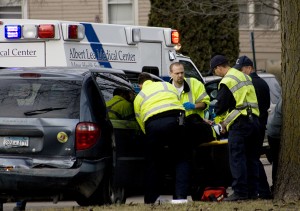 Emergency crews lift a man out of a minivan Wednesday afternoon after a crash at the intersection of West Main Street and Euclid Avenue. — Sarah Stultz/Albert Lea Tribune

According to police, Monica Hernandez, 39, Raymond Hernandez, 67, and Nicole Storvick, 29, all of Albert Lea, were treated for injuries.

The extent of their injuries as of press time was unknown.

Reports stated the crash took place at about 2:45 p.m. at the intersection of West Main Street and Euclid Avenue.

A Dodge Caravan, driven by Monica Hernandez, 39, was reportedly facing east on Main Street and was stopped in the left lane to turn north onto Euclid Avenue, when it was reportedly rear-ended by a Pontiac G6 driven by Storvick.

Police stated Herman Hernandez and Raymond Hernandez were both passengers in the minivan. A third passenger, Noah Alexander Kessel, was not injured.

Storvick did not have any passengers.

The speed limit on Main there is 40 mph.