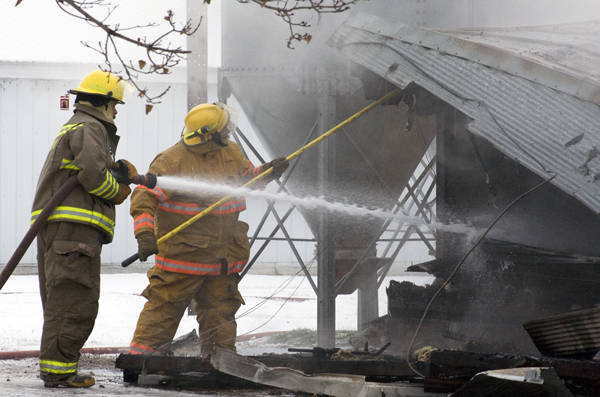 Firefighters douse a hog barn at 14987 670th Ave. with water Tuesday morning after a fire started at the farm. One hundred-eighty pigs perished in the fire or from smoke. — Sarah Stultz/Albert Lea Tribune

CONGER — About 180 pigs died Tuesday morning as a result of a fire on a farm three miles south of Conger. 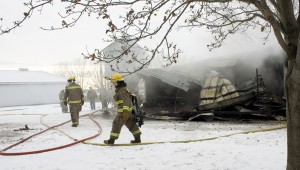 The fire was at a gilt-production facility at the Ron Kruger farm, 14987 670th Ave. The farm is at the end of a dead-end gravel road in Mansfield Township.

Kruger’s wife, Jane, said 30 were piglets and the rest were pigs between 120 and 150 pounds. Not all died directly from the fire; some suffered from smoke and fire and survived but were suffering and had to be shot.

Firefighters from Conger, Alden and Emmons battled the blaze.

Jane said Ron has been raising hogs for 45 years, 37 of which they have been married.

He was in a nearby barn that houses 500 sows when the fire started, and he looked out the window and saw smoke.

Jane said Ron attempted to open the side door and gate of the barn to let out the pigs and would have likely gone into the fiery barn to try and save pigs, if it were’t for Conger firefighter Mike Fischer — who works for the Krugers — and who pulled Ron back out.

Authorities have not yet released the cause of the fire.