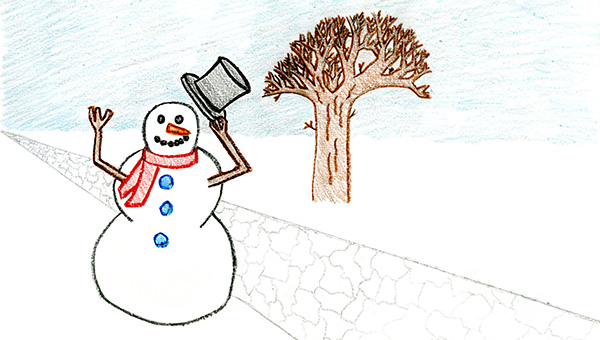 Art by Alex and Brandi Hagen

Editor’s note: This is a fictional story written by Tribune newsroom staff. Each person took a turn writing a portion of the story. We wish our readers a merry Christmas and a happy New Year.

Albert Lea Tribune reporter June Jansen stumbled into work on a beautiful Christmas morning. The ground was white with snow from the previous days but now the sun was out. Her editor had assigned her to work on Christmas.

She was single with no kids. There would be no family gathering for June. Her family resided in Minnetonka, and she planned to celebrate New Year’s this time instead of Christmas. The most she did was attend a Christmas Eve service the night before, quietly sitting in the back. Otherwise, she was doing her best to not let the loneliness of flying solo on Christmas Day get to her. She hadn’t even let any of the sources on her beat know she would be alone on the holiday.

Besides, working on Christmas Day was easy. She was supposed to shoot photos of families playing outdoors and write a little feature story. This was in addition to day-to-day tasks of monitoring the website, preparing obituaries and proofreading a special section. Working the holiday would give her an extra day off come New Year’s weekend, a good bargain, in her view. She would open presents on that weekend.

June gathered her notepad and camera to head for a local sledding hill when she heard some strange reports on the police scanner. A traffic cop had spotted a man in a snowman costume walking through Central Park with a broomstick in his hand.

She just had to check out this report.

She hopped in her compact car, drove to the front of First Lutheran Church, stepped out and saw what appeared to be a snowman running around with children, laughing and playing along the diagonal sidewalk that cuts through the park. This didn’t look like some costume. It looked as real as could be.

June reached into her car and grabbed her camera.

Could it be? she thought.

As she walked down the sidewalk to get a closer view, her mind drifted back 20 years, to when she was a girl.

She was seated in a chair in front of the window with her older brother, Sam. June looked out the front of the house at the snowman she had made a few hours before. Dressed in a scarf, with a carrot nose and eyes made out of coal, the snowman stood still in their front yard as the wind bellowed around him.

“You have heard that song?” Sam asked, interrupting her gaze.

“Why, “Frosty the Snowman” of course!” Sam said. “They say it is a fairytale, but I believe it can really happen.”

“What can happen?” June asked with curiosity.

“I believe our snowman can come alive,” Sam said. “We just have to find a magic silk hat to place on his head.”

Sam pulled out the tattered songbook of Christmas carols sitting on top of the piano.

“Look at this,” he said. He pointed to a picture of a snowman dancing and playing in the street with a group of children. The snowman had a corn cob pipe, a button nose and two eyes made out of coal. When the children placed the silk hat on his head, he began to dance around.

She and Sam scoured the house that evening, pulling out every one of their hats — their winter hats, their summer hats, their rain hats, even their father’s old theater hats.

One by one, they placed the hats on the head of the snowman, but each time the snowman stayed still.

“I guess it is a fairytale,” June said to Sam with a sigh. She remembered how sad she was as a young child to find out the popular children’s song wasn’t real.

Flash forward 20 years. June stood in Central Park, a small, round snowball coming straight at her.

Acting quickly, she dived to the ground behind a pile of snow and started forming snowballs. After all, what was it going to hurt to join in on a good old-fashioned snowball fight?

After June formed a small pile of snowballs she peered over the snow pile to find a target. As she was watching the parents and the bundled-up children chasing each other around the park, she had a feeling that she was no longer alone.

There wasn’t anyone to her right, but when June looked left her jaw dropped. What she and Sam had tried so hard to make happen when they were little was happening right before her eyes. Frosty the Snowman was tipping his hat and smiling at her. She was so in shock that her photographer’s instinct to capture the moment for the newspaper didn’t cross her mind. She just stared and waited to see what was going to happen next.

Frosty slid closer and picked up a perfectly round snowball from June’s pile and motioned for June to do the same.

“Let’s have some fun now before I melt away,” Frosty said.

Almost in a daze, and still not quite believing this wasn’t a dream, June smiled and joined in the fun. She thought she should probably pinch herself to check that it wasn’t a dream, but she didn’t want to because even if it was a dream, it was a good one.

But Frosty wasn’t content to just have a good-natured snowball fight. He started running here and there around the square and taunting June and the children to catch him if they could.

The police officer who first reported the sight of Frosty caught sight of him again and yelled “Stop!” But Frosty had to hurry on his way.

June started to worry that she hadn’t captured the wonderful event for the newspaper, but then she realized no one would believe her anyway. She thought about calling her brother so he could catch a glimpse of Frosty, too. But she realized Frosty was on his way and wouldn’t be sticking around very long.

June, with tears in her eyes, waved at Frosty and wondered whether she would ever get to see him again. Frosty saw her, waved and told her not to cry because he’d surely be back again someday.