‘A lot of instinctive play’

WELLS — The NRHEG girls’ basketball team beat United South Central on Friday night by a score of 76-32 on a quietly dominating performance by Carlie Wagner and company. 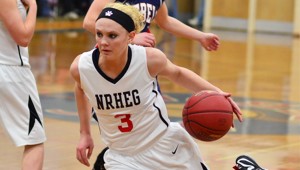 Buck Monson/Albert Lea Tribune Carlie Wagner breaks to the basket against the Rebels on Friday night.

Wagner had 33 points, six assists, four rebounds and seven steals and sat about half of the second period giving some other players time.

“She didn’t shoot well tonight like she usually does,” Panthers coach John Schultz said. “She’ll get through it.”

Carlie’s twin sisters, who are eighth graders, scored 16 points between the two. Maddie scored seven while Marnie scored nine. The two younger Wagners offer a different style of play according to the coach.

“They definitely add a lot to our offense. They give us a lot of instinctive play, lay ups and a lot of 3-pointers,” Schultz said.

“Too many turnovers,” Rebels coach Stu Hendrickson said. “You make turnovers against a team like that, and they’re going to turn them into points, and they did.”

The Panthers had their fast break working well and scored some easy lay ups off of the Rebel turnovers. Jade Schultz scored six points and finished with 12 on the night along with the team high of six rebounds.

Amanda Allis was strong for the Rebels in the second period making four straight field goals for the team to keep the Panthers from widening the margin of victory. Allis finished with a respectable 11 points on the night.

Carlie Wagner scored 10 straight points early in the second period followed by another four point run a bit later before heading to the bench for the remainder of the game.

“Being critical, we were a little sloppy shooting, but that will come around when it needs to,” Schultz said. “I was just happy with our hustle, crashing the boards, pushing the ball and just working hard. That’s what we thrive on, is the effort.”

The Rebels coach knew what they were up against going into the game.

“Well, they are ranked No. 2 in the state for a reason,” Hendrickson said. “We knew coming in that they are a good team, defending conference champions and section champions. A lot of those girls played in the state tournament last year and a majority of our team was playing B-squad last year.”

The Rebels (1-2) next game is Friday at Randolph. The Panthers (2-1) also play Friday but will play at home against Bethlehem Academy.