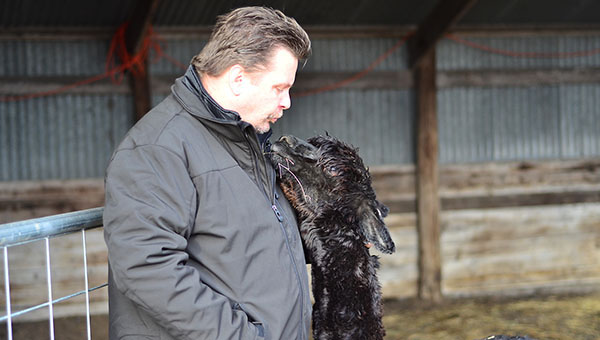 HAYWARD — For the Hantelmans of Hayward, extraordinary is ordinary. 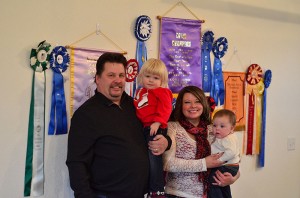 The Hantelmans pose by the ribbons that their alpacas have won over the last few years. -- Buck Monson/Albert Lea Tribune

Since 2008, Joel and Kristi Hantelman have owned alpacas on their ranch in rural Hayward. The ranch is known as Guardian Angels Ranch, and the focus is on raising champion suri alpacas.

“I thought about it for about five years before we started this,” Kristi said. “We went to a seminar in Nebraska before we got married and decided it was for us.”

There are two kinds of alpacas, suri and huacaya. Suris have fiber that grows long with silky dreadlocks while huacayas have a very wooly, dense and crimped fleece. About 90 percent of all alpacas in North America are huacayas.

They ended up buying three suri alpacas and a baby and now have 14 alpacas at their ranch. They also have a llama, which is brought in to protect the alpacas. 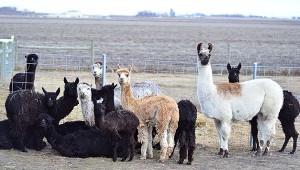 A look at all of the Hantelman's alpacas. There is one missing that is out of town on a breeding mission. They currently have 14 alpacas. -- Buck Monson/Albert Lea Tribune

“The llamas are supposed to be a guard to protect the herd,” Joel said. “We call ours Dolly Llama because she hides behind the alpacas.”

Male llamas are capable of kicking a coyote to death. Alpacas don’t have much of a defense against predatory animals. The alpacas’ defense mechanism is to spit.

Spitting is taking bile from their stomachs and spitting the foul-smelling saliva at their offender. Males often spit at each other when they fight. A female will spit at a male, letting him know that she is pregnant and unable to breed. 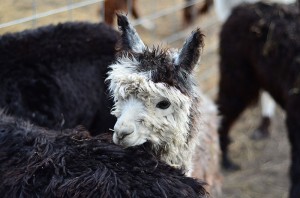 A look at Platinum Delilah, a rare alpaca that the Hantelmas own. -- Buck Monson/Albert Lea Tribune

The males and females must be kept in separate areas to prevent constant breeding. The Hantelmans have two males and 12 females. They have been very fortunate to have birthed nine females and only one male, which is ideal for breeding purposes.

“We want to get somewhere between 20 and 30 of them,” Joel said. “We are more into showing, breeding, selling and buying alpacas rather than selling their fibers.”

There are roughly 16 different shades of alpacas. The Hantelmans have mostly black alpacas at their ranch now but are looking to branch out to other colored fibers.

“Our silver alpaca out there is one of just a handful of silver half huacaya alpacas in the country,” Joel said. “It’s a bloodline that goes back to Peru directly instead of skipping generations. If she does well at shows, she could be worth a lot of money.”

Owning alpacas is a business for the Hantelmans. They have traveled around a lot showing them for the last few years.

“We show them all over the country, several times a year,” Joel said. “We have had a couple of third-place finishes at our first nationals two years ago.”

The couple registers their alpacas through the Alpaca Owner and Breeders Association. The AOBA provides them with a lineage of the animals that basically is a family tree. The AOBA also keeps track of how they show, so when they go to sell the alpaca, they can show the buyer the history of the alpaca so they can have confidence when buying it.

“They say the first five years is always the toughest because nobody in the alpaca industry knows you or trusts you yet,” Joel said. “We’ve sold one or two, and we really want to get more into that. We had four born this year, and we have five that are pregnant now. We sell them after they have shown for a year or two and hope they do well at the shows.”

Their family consists of Joel and Kristi and their children Kayli, 22, Ian, 14, Ferran, 2, and Paisley, 9 months. Ferran has her favorite alpaca named Nakira. Every time Ferran goes out to see them, Nakira gives her a kiss.

“It’s rare if an alpaca is friendly like that. They’re not mean. But they just keep their distance. Once you catch them, they are fine,” Joel said.

Daily chores on the ranch consist of feeding them and getting them water. In the winter months, their water must be heated.

“They go through about two bales of hay a day between all 14 of them,” Joel said.

Their health must be monitored on a regular basis. And the dung must be cleaned up once in a while. The good thing about alpacas is that they have communal dung piles to make clean up a little easier.

The next project for the Hantelmans is to get the barn done up so the alpacas can go in and out whenever they want.