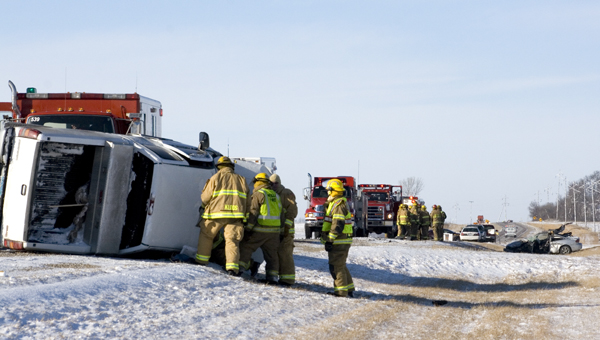 ALDEN — Two people were injured Monday afternoon in a head-on crash on Minnesota Highway 109 between Alden and Wells in Faribault County. 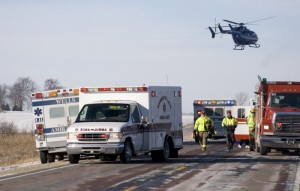 A Mayo helicopter flies away from the scene of a head-on collison Monday afternoon on Minnesota Highway 109. — Sarah Stultz/Albert Lea Tribune

Ronald L. Hinderman, 49, of Mankato, was transported by Mayo One helicopter to Regions Hospital in St. Paul, where he remains in critical condition, according to the Minnesota State Patrol.

A second person, Jared Bowman, 23, of Albert Lea, was treated and released for injuries from Mayo Clinic Health System in Albert Lea.

The crash reportedly took place at 12:45 p.m. about a mile west of the Faribault-Freeborn county line.
According to the State Patrol, Bowman was driving a 2003 GMC Sierra pickup and Hinderman was driving a 2004 Chevrolet Cavalier. The Sierra was eastbound, and the Cavalier was westbound when the two vehicles collided.
It is unclear who crossed the center line.

Reports indicate no alcohol was found in Hinderman, and it is unknown whether Bowman had alcohol in his system. The roadway was dry, according to the State Patrol. The air temperature at the time was 15 degrees.

The Faribault County Sheriff’s Office, Alden Police Department, Minnesota Department of Transportation and the Wells and Minnesota Lake ambulance assisted at the scene.

The road was shut down as the Mayo helicopter landed and emergency responders cleaned up the scene.