Funeral services for Blanche Nelson, of Albert Lea, will be at 11 a.m. Monday at Grace Lutheran Church, Albert Lea. The Rev. Andrea Myers will officiate. Interment will be in Hillcrest Cemetery. Visitation will be from 4 to 7 p.m. Sunday at Bonnerup Funeral Service, Albert Lea, and one hour before the service at the church. 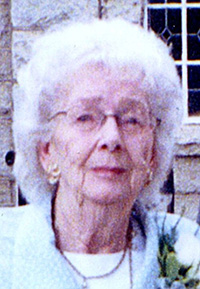 She was born on March 27, 1922, in Albert Lea, the daughter of Elzie and Bertha (Inderlid) O’Neal. Blanche graduated from Albert Lea High School. She married Milton R. Nelson on Feb. 2, 1941, in Mason City, Iowa. A lifetime Albert Lea resident, Blanche had worked with her husband at Nelson’s Appliance, later Wilson & Co., and then Food Bonanza. She was a member of Grace Lutheran Church where she had taught Sunday School and also belonged to the American Legion Auxiliary.

She enjoyed fishing and gardening. Blanche and Milton had especially enjoyed traveling to deliver the fruits of their garden to their children, who were scattered throughout the country.

She was preceded in death by her parents, her husband Milton in 1989, great-granddaughter Lenna Durbin and two brothers Leo and Harry O’Neal.